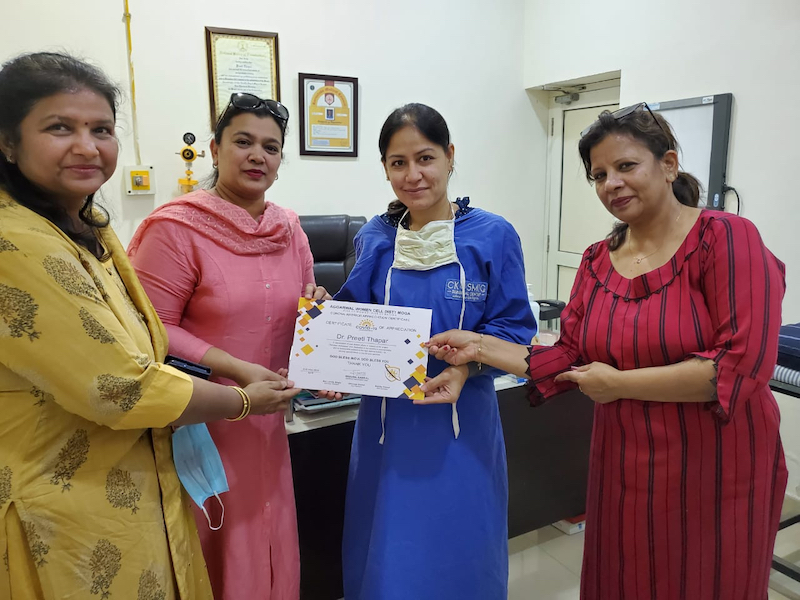 An MBA, Bhavna Bansal who is a businesswoman by profession, is working tirelessly for the welfare of underprivileged in Moga town of Punjab. She is heading the Aggarwal Women Cell (AWC) which came into being two years back and today has 110 women, who are working for the well-being of the needy.

“Our NGO has been working for women empowerment, and upliftment of the underprivileged children, besides regularly organising health awareness sessions for pregnant women and education for slum children. In the last two years drug abuse awareness camps were organised in private schools, besides providing legal aid to children in collaboration with legal advisory cell. We also regularly have dengue awareness campaigns, yoga camps, and recently felicitated frontline women on international women’s day under ‘Women with Wings’ programme”, she says.

Bhavna who is the District President of Aggarwal Women Cell, explains that the AWC also launched a massive campaign to support the needy affected by COVID-19 pandemic. The project called ‘Anndaan Mahadaan’ was to distribute ration among the poor besides giving them sanitisers, sanitary napkins, soaps etc.

AWC also worked for the welfare of migrant labourers, who were helped with filling up online forms, their screening was done and food was provided to those waiting at bus stands.

Sanitisation of different areas in Moga was done, and the underprivileged people were distributed masks in different areas, besides setting up langars.

Bhavna adds, “Corona warriors like those in the local administration who had worked tirelessly were felicitated like Deputy Commissioner Sandeep Hans, SSP Moga Harmanbir Gill who were handed over certificates of appreciation. We also felicitated others who have been working for the society including the media which has contributed so much by reporting from different parts of the district and not fearing for their own lives.