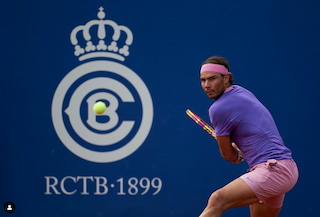 Nadal’s Will Power and Resilience took him to the Pinnacle

With his 21st Grand Slam level title, the 2022 Australian Open, Rafael Nadal conquered a bastion that no man before him had ever done. Nadal outpaced and outlasted his tall, strapping, hugely talented Russian opponent Daniil Medvedev, 2-6, 6-7,6-4, 6-4, 7-5, to execute an astonishing come from behind victory on one of the grandest showpiece stages of tennis, at Melbourne, Australia.

Long criticised for being a clay court bully, and having won the French Open a mind-boggling 13 times on that surface, Nadal has emerged in recent years to be recognised as one of the greatest all round tennis players of all time. It is a testimony to his fitness, his strength and his skill that he has been able to win each of the majors- Wimbledon, the US Open, the Australian Open and the French Open, at least twice. No longer can anyone label Nadal as a unidimensional player, and no longer can anyone doubt his ability to perform under any conditions.

But the truly inspirational facet of Nadal’s latest feat is the fact that he was unable to walk a few weeks ago, recovering as he was from a severe injury. In fact his great friend and rival Roger Federer had joked that they were on crutches and playing any sort of tennis might be impossible for them. But even at the age of 35, with almost 2 decades of top level tennis behind him, Nadal displayed the will power, the ability to vanquish pain, and an undeterred resolve to not only win the fitness battle, but also to win the most significant major championship of his life, despite all odds.

The AO final itself was the stuff of legends. The 25 year old Medvedev kept dominating Nadal’s serve to begin with and outshone in from the baseline in long rallies. Yet, as the match progressed, it was the younger man who wilted in the face of an astonishing barrage of lethal, pin pointed groundstrokes and deft placements that Nadal unfurled in a tireless, magical, display of quality tennis. The fact that Nadal was able to hit only his 3rdAce of the match when he needed it most, while serving for the match in the fifth set, is an indication of his staying power and persistence. Medvedev would have traded any of his brilliant 23 Aces for just that one more chance at staying in a final match that had seemed his for the taking, mid way through. But after 5 hours and 24 minutes of sparkling, magnetic, electrifying tennis, Nadal was left standing as the supremo of men’s tennis in the modern era, with his 21st big one.

The Novak Djokovic episode before the tournament began and Federer’s absence from the field did not diminish the lustre of their great rival’s feat. At 40 years of age, the magnificent Federer might have lost the chance to win any more major titles, though he will be a sentimental favourite at Wimbledon 2022. Djokovic might well put things together once more to win a few more in the years to come. But Rafa Nadal has showed us in this victory just what will power, determination and hard work can truly attain.