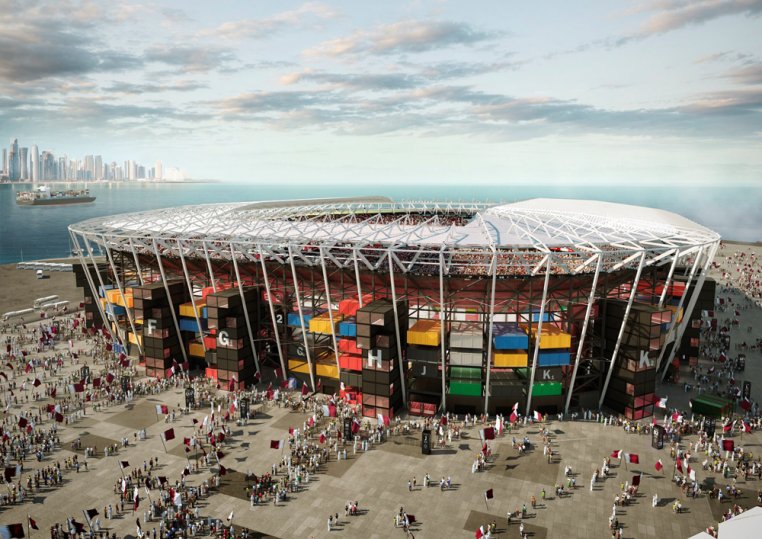 Movable and Reusable Container Stadium Is The Way To Go!

There are major changes occurring in Qatar – many miles of superhighways are being built, the metro rail network is already running, new hotels are popping all over the city and last but not the least, grand stadiums, as many as seven, are being readied; all set to host the FIFA World Cup, 2022.

With so much construction going on, at times it seems an overkill, especially with sixteen existing stadiums and seven new stadiums coming up. But to overcome this overcrowding, once the World Cup is over, two of the new stadiums will be repurposed and reduced in capacity to half and one stadium will have a modular design so that it can be dismantled and shipped to another location after the tournament is over. Modified shipping containers are being used to construct the Ras Abou Aboud stadium. The stadium is being designed by Fenwick Iribarren Architects of Spain. Their design philosophy is to make imaginative projects with controlled costs and still achieve unique and functional buildings.

Like a game of Lego, the containers will be stacked in a circular shape to come up with a 40,000-seater stadium and all the other paraphernalia required in a typical stadium. The thought behind this is that using adapted shipping containers as building blocks cuts down on the amount of building materials required, creating less waste and reducing the stadium’s carbon footprint. The Ras Abu Aboud Stadium is located on the waterfront of the downtown West Bay area with views of the Corniche, Doha’s landmark 7-kilometer-long promenade development.

Repurposing shipping containers has led to other inspirational ideas in Doha, a temporary night market that runs through the winter season in the evenings is also entirely housed in containers repurposed as little shops and restaurants. These containers or shall we say shops are brightly painted, stylised with spunky furniture and fitted with modular kitchenets. One of the aims of these night-markets are to give opportunities to start-up entrepreneurs to showcase their ideas. It is a small beginning but surely, it’s a step in the right direction towards sustainability.