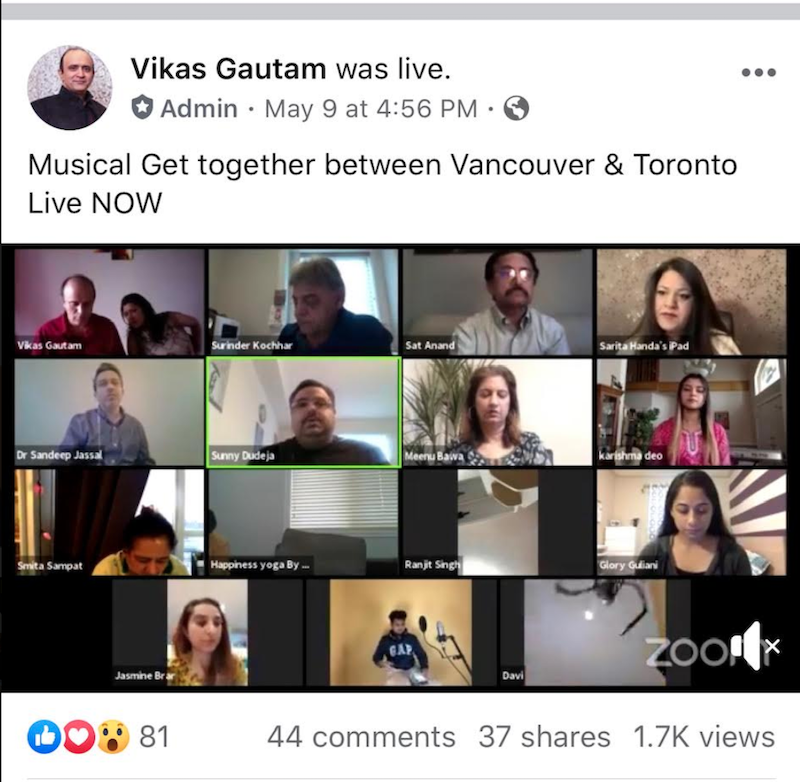 From March onwards, coronavirus effectively locked us all in our homes and the events and conferences that would allow us to meet new people or for the recreation were cancelled. Similar impact was seen in Canada and people were sitting at home, away from jobs and nothing much to do.

It was then, a BC couple decided to help keep the community’s spirit up and have some fun in the process and with the goal of staying connected as a virtual choir. Vikas Gautam, an IT professional and his wife Sheetal Gautam decided to start a virtual antakshri on Zoom on weekends. They formed a platform V4U Entertainment and got connected with some people and asked them to form a team to play online antakshri while each of them sat on their computers or tablets or even using mobile phones. The very first episode was an instant hit.

Next week more people wanted to join the event and then some sponsors also stepped in. They decided to sponsor the event by giving away prize coupons to each member of the winning team. Some known radio jockeys also offered to emcee the events.

The next was an antakshri competition between Vancouver team and Toronto team. It was followed by a singing event participated by singers from both cities. After that another event, a great hit was Sher-o-Shayri and Kavi Sammelan. It was participated by 34 prominent litterateurs associated with Bhartiya Kala and Sahitya Parishad, Vancouver and Hindi Writers Guild, Toronto came online to share their poetry and keep the audience spellbound for over 4 hours. Ghazal singing was the next event, where again amateur singers participated in the event.

It was not just cultural events that were organized. A weekend saw people playing Bingo (Tambola) also and winning prizes. A dance contest was also being organized for children to ensure their participation in the event. Vikas Gautam said it gave a platform to amateur singers and performers and also a treat for those earning to witness a musical extravaganza.

Sanjay Mehta is a former journalist who has worked with Hindustan Times and Day and Night news channel in Chandigarh. He is now settled in Surrey BC and can be contacted at sanjaymehta251@gmail.com