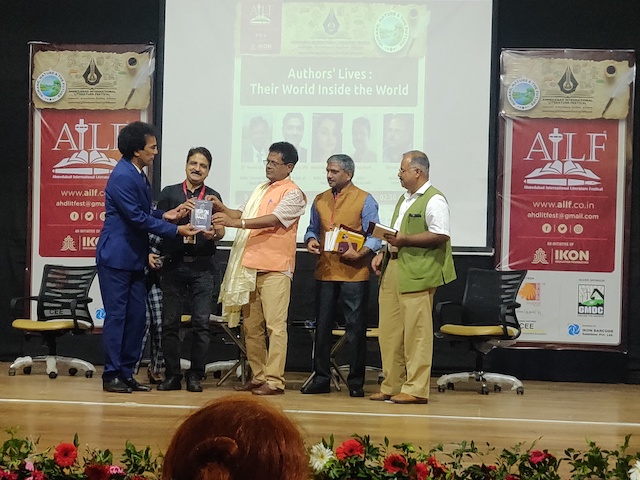 City-based journalist turned author Aditya Kant, who created ripples with his debut novel ‘High on Kasol’ was among the league of eminent speakers who took part in the two days Ahmedabad International Literature festival held early this week (October 8 and 9).

The annual event which was inaugurated by the renowned Hindi Film lyricist Sameer Anjaan, in the presence of several other prominent figures from art and culture, witnessed participation from the likes of Padam Shri Kartikeya Sarabhai, Australian writer and multimedia artist Kathryn Hummel, actor-producer and writer Tusshar Kapoor besides Aditya Kant and several others.

Aditya Kant said that the festival gave a good opportunity for the exchange of views and thoughts not only in the field of literature, art, and culture but also on the burning issues concerning the environment, nature and what the future holds for us. He said the event was a good platform for spreading awareness about art and culture and encouraging youngsters to inculcate in them the habit of reading.

Sameer Anjaan during the discussion on a range of subjects related to film songs and his life journey said that he gets inspired by even a word or small dialogue from anyone during his routine life and uses it for creative purposes sometimes somewhere.

Noted Hindi Films actor, producer, and author of the book ‘Bachelor Dad’ in conversation with the founder of the festival Umashanker Yadav and literary agent Suhail Mathur talked about the thought processes and the joys and sorrows of being a single parent. He also expressed how his management degree is now helpful in managing his film production business.

The content-rich festival saw around 80 speakers from across India and abroad spoke on a range of topics in more than 20 sessions. Sessions were enthusiastically attended by a large number of inquisitive audiences. More than ten books were launched including ‘Decoding Life, SK Nanda’ by Dr SK Nanda, IAS (Retd.) to encourage young and honour experienced authors.

Sessions on Women’s Writings and Children’s Literature received a huge response from the attending audience. There was an overwhelming response to the Multilingual poetry recitation which included Gujarati, Rajasthani, Hindi, Urdu, and English languages.

Festival Director Umashanker Yadav with the promise to keep bringing grander shows in the future, thanked Gujarat Tourism for being a Patron of the festival in this edition, GMDC for being a Silver Sponsor, Ikon Barcode Solutions Pvt. Ltd. for powering the festival and Centre for Environment Education for being Venue Partner. He also expressed his heartfelt gratitude to everyone associated with the festival.

In the welcome speech, the founder and director of the festival Umashanker Yadav said that these types of festivals are the cultural infrastructure of nations that work as a platform for emotional and creational rides to their citizens besides supporting creative industries.