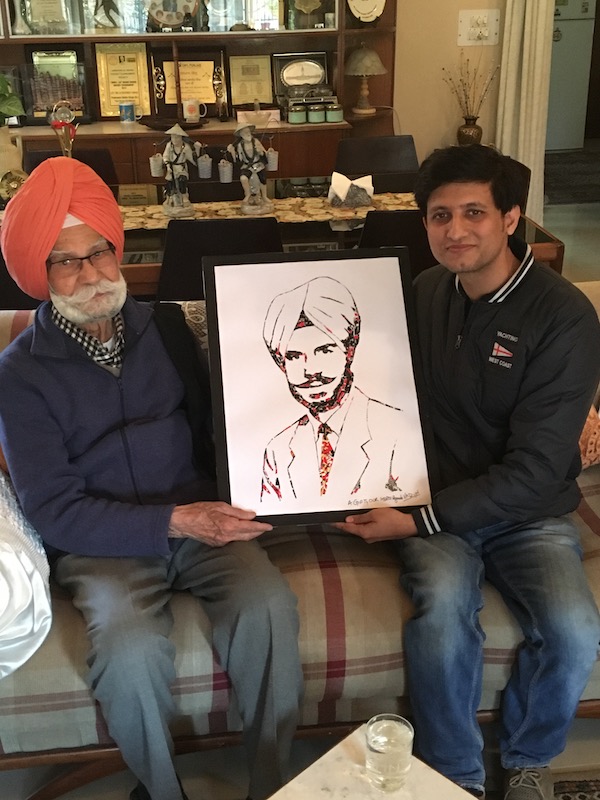 The city lost an international hockey legend, Balbir Singh Senior early this week. We talk to a Chandigarh artist who resides in Jalandhar, who recalls that moment when he had gifted one of his artworks to the legend two years back.

A self-taught artist Varun Tandon, was working in IT Park Chandigarh before he ventured into his passion. He has made several portraits using different materials.

Sharing details about his project, Varun says, “Balbir Singh Sr.’s artwork was prepared with a broken hockey stick two years ago. I gifted this artwork to him. He was very happy when he saw that, he shared his life time achievements and stories with me and while coming back he gifted me his signed autobiography book and a photograph.”

Varun has earlier made artworks which include PM Modi with Chaipatti (as he was a tea seller), Late Dara Singh ji with Alsi ki Pinni as he was a wrestler, martyrs with burnt matchsticks because they sacrificed their lives for the freedom of our country. He has also made General Dyre with artificial blood because he is also known as a butcher of Amritsar.

The artist made a portrait of Mahatma Gandhi sized 150 square feet with khadi cloth on 150th Gandhi Jayanti. He also made an artwork of Late Jaspal Bhatti with smiley stickers on world laughter day sized 31 feet x 25 feet and that of Late Nek Chand with waste materials.Guru Nanak Dev Ji’s portrait was made with 550 Ek Onkars on the occasion of 550 Parkash Parv.

“One of the most unique art pieces which I made was a portrait of spider man, it was prepared with spider web. There were two more, one is Captain America made with liquid medicine, and iron man was made of iron dust”, says Varun.

He adds, “I also did exhibitions for blind people and prepared special kind of artworks which they can feel. I used coffee, green vegetables, flour, pencil waste, audio cassette reel, cement, gold foil, paper waste etc. to make other portraits in the past.”