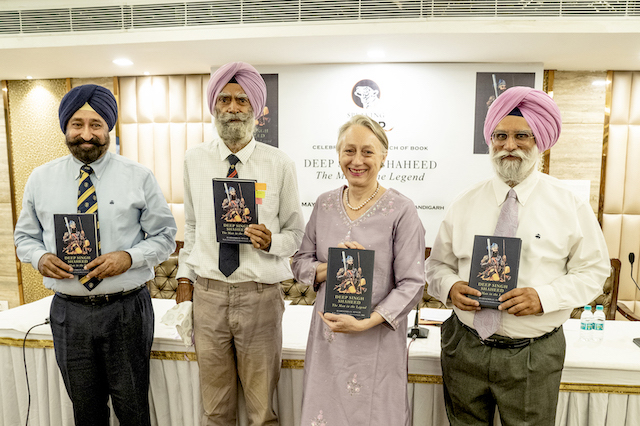 A Memoir on the Man in the Legend

Published by Speaking Tiger Books, “Deep Singh Shaheed: The Man in the Legend”, is the first detailed biography of one of the foremost cultural icons of all time in Punjab – Baba Deep Singh Shaheed, one of the most revered heroes of Sikh history who transcends religious boundaries to resonate with Sikhs and non-Sikhs alike with a totemic appeal.

The author Harisimran Singh retired in the rank of Colonel after a full career of thirty-one years in the Indian Army, is an alumnus of The Lawrence School, Sanawar, and did his masters at King’s College, London, while on a sabbatical from the Army.

He said that this biography is based on many years of research spent examining a wide range of Persian, Punjabi and English sources alongside genealogical records, oral traditions and a thorough battlefield study,

This work tends to eschew hagiography to ground all research on this spiritual-cum-military leader whose life story interweaves through the turbulence of 18th-century Punjab, often referred to as the ‘heroic century’, he said.

In partial fulfilment of the master’s program, his dissertation focused on Frederic Manning and Henri Barbusse, two soldier writers of the Great War. Since retirement in 2011, he divides his time between Chandigarh, where he is settled, and Pahuwind, near Tarn Taran, his native village. Besides military history, he enjoys music and poetry as well as trekking in the mountains.

The book is available at all bookstores, www.speakingtigerbooks.com, and Amazon and Flipkart.