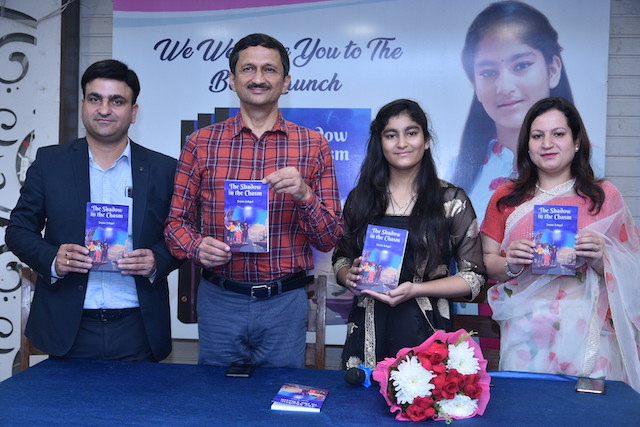 Joyna Sehgal, a twelve-year-old budding author from Chandigarh, recently released her first book titled ‘The Shadow in the Chasm’ at Chandigarh Press Club.

The book, written as a play, is of a magical land that kindles your imagination. It takes you from an enchanted pond in the backyard of a house to a mysterious land of witches and wizards. The adventure and magic take you on a journey with two ordinary 15-year-old girls.

The Shadow in the Chasm was released by Mr Vivek Atray, ex-IAS, motivational speaker, and author.

Talking about her journey as a first-time author, Joyna revealed that she is a great admirer of J.K. Rowling, and she cultivated a habit of reading at a very young age. She expressed that the process of writing and putting together this book was challenging but rewarding.

A student at St. Xavier’s Senior Secondary School, Chandigarh, she said that her parents and teachers have been very supportive and brought out the best in her. She hopes to continue writing and inspiring her fellow students. The Browser has published the book and it is available for purchase on Amazon India & International.

Joyna has not only been a great student on the academic front, but she also has many extra-curricular achievements. She has been awarded three gold medals in English, Aptitude and Science organized by Silver Zone Olympiads, New Delhi in 2021-2022. She was also awarded an Entry Level Graded Examination in Communication Skills, Initial Communication skills with distinction by Trinity College, London.

She also secured 1st position in ‘Milen Sahitykaro Se’ an inter-school Hindi poem recitation competition held by Carmel Convent School Chandigarh. In addition to this, she has received many awards in English & Hindi poetry, storytelling competitions, Declamations & Elocution. She has also participated in brain bee challenges, poster making & best out of the waste competition held at the school level. She also has a great interest in many sports like tennis, basketball, and football.