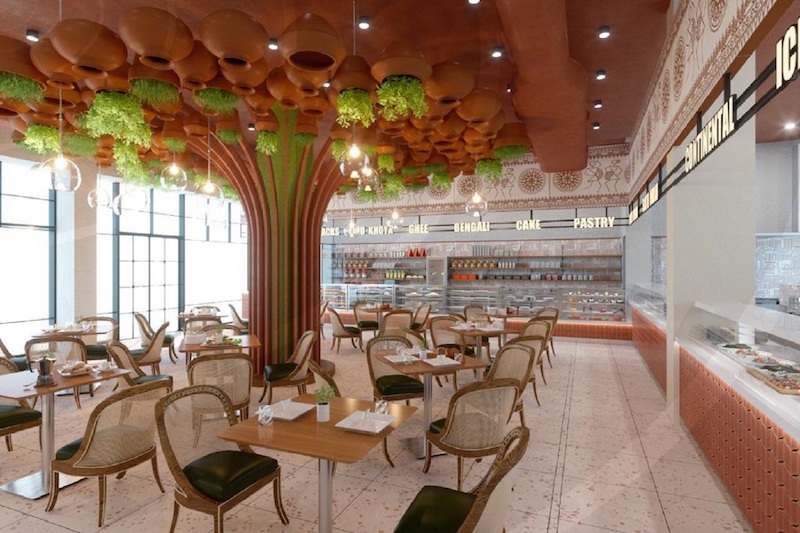 This Architect Builds Narratives Through Her Designs

By Lakshmana Venkat Kuchi on September 5, 2021

Through her creations, using spaces in interiors innovatively, she not just designs an environment to make your world more interesting but also weaves in a narrative that hits the target.

An architect and interior designer, Aatika Manzar scores very high in terms of newness in approach, appearance, and aesthetics – whether it is your house, office, hotel, or any commercial establishment.

Her every design has a personal touch, whether it is in use of her calligraphy skills to write on whiteboards or playing with lighting ideas. These elements make designs interesting and space more fascinating, says Aatika who has undertaken prestigious projects of varying shapes and sizes across India and abroad.

As head of a design collaborative, Aatika is an architect by training and profession. After studying architecture at Jamia Milia Islamia university in Delhi, she did master’s in interior designing from Birmingham University which has given her the necessary wherewithal to conceive visually appealing designs that are also high on their utility quotient.

Take for example a book café project she did in Faridabad that catered to visually challenged people as well – and she designed the café to be all-inclusive complete with tactile and a Braille menu.

Her attention to even tiny details is what her satisfied clients get – from say the owners of prestigious store in Emporio or the chic Fari Café in Dubai and New Delhi to the residents in Nizamuddin whose homes she spruced up with her ideas and brightened them up with tasteful colours and shades to present an overall picture that’s pretty.

Her studio works seamlessly weave interior and exterior spaces, from large architectural areas to the most intricate of furniture details. Having worked on different aspects of designing spaces, from food and beverage (hospitality), retail, residential to furniture details over the past few years, she takes pride in her design philosophy of treating every space as a narrative.

An inspiration to wannabe women entrepreneurs, Aatika believes that for women the challenge is bigger in several male-dominated spaces, like the construction industry. She has had to fight it harder to penetrate this domain, and be counted as an equal, and actually more than her male competition. Now over 100 projects under her belt across India and the Middle East in the past ten years in the business, she sure has become a success in her own right.

She mixes her favourite subject of Mathematics and her passion for designing in her architectural and designing journey. She worked for a few private companies before launching on her own four years back.

Aatika Manzar Designs is a design collaborative she set up four years ago. Some of the projects she undertook include ­the Gaurav Gupta store, the chic Farzi Cafe, Playboy The club, Bombaybakery, Station Bar, Out of the Box, and many more. The sectors she has executed projects include hospitality, retail, design spaces to residential, hotels, malls, and departmental stores.

She is perhaps among the very few design companies that can claim to have designed over 50 departmental stores in the country, all with new and innovative concepts and themes.

In the year 2020 itself, the studio worked on a Book café that aimed to be accessible for the differently abled. The project was unique and challenging. Aatika’s design for this included a ramp to access the entire area in a wheelchair and navigation lanes with tac tiles for the visually impaired. The washrooms were designed keeping inclusiveness in mind. With a lot of research and studies, this café became India’s first ‘accessible to all’ café.

Of late, she has also extended her range and focused on residential constructions and has been working on penthouses and high-end residential projects. Given her expertise in both architecture and interior designing, she is in a position to help the client from scratch to the last piece of artifacts that are bought for the house.

What is that project that Aatika would consider a challenge?

She would love to give a complete makeover to an old haveli or any abandoned ancient structure and make it come alive – as a totally new, exciting, trendy yet ethnic, traditional yet modern marvel. A project that gives her a chance to fully explore and exploit her creative abilities to the fullest to give a new life to something that has been in disuse for years together.

She believes that she will take enough care and ensure adaptively reuse to retain authenticity and essence of an old haveli or site, and also at the same time put it to better use.