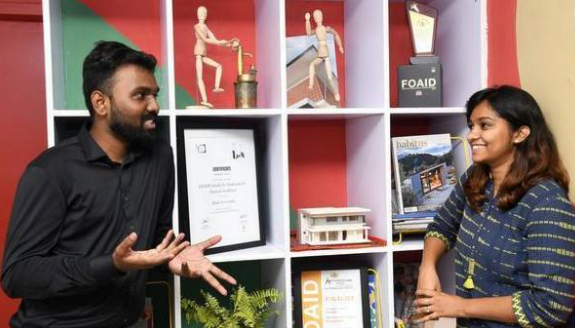 The World Loves The Houses They Build

By Lakshmana Venkat Kuchi on January 3, 2021

With Vignesh Sekar and Shamini Lakshmanan, architecture is much more than designing and building, it is about buildings that stand out. Already their designs are vowing audiences and architects across the globe.

At just 25, these two architects from the temple town of Madurai in Tamil Nadu, have won global attention for their first major project – a climate-responsive Chettiar House that the duo built-in Thirupattur near Madurai.

“We want to be the face of the architecture of South India,” Vignesh told Tricity Scoop over the phone from Madurai, just before leaving to celebrate the end of 2020. While for most people Covid-hit 2020 has been the worst year, but for Vignesh and Shamini, the pandemic brought them more work that has kept them busier than ever before.

“Last year, we finished four projects, but this year, we have 15 projects on hand, and a majority of them are at the onsite construction stage,” he said. The reason for this spurt in demand for their services has everything to do with the global acclaim that their climate-responsive Chettiar House received and brought them recognition among peer groups and professional bodies.

In fact, “we are having projects in Kuwait as well, but these have suffered due to Covid as most of the labour was Indian and they had to come back. In the new year, after vaccination, activities are expected to restart, including our stalled Kuwait projects,” he said.

It was an unexpected recognition from Arc Daily, New York’s top architecture website that put the duo under the global spotlight, as it sparked off more awards, nominations, and articles in journals to come their way in quick succession in 2018.

Vignesh and Shamini were scheduled to go to the United States for higher studies when the challenging project in Thiruppathur, 64 kilometres East of Madurai, came up. The challenge was: the client wanted a house with contemporary aesthetics while combining the cultural essence, traditional architecture, and context of his native Chettinad region.

“It was built in a coconut grove with 200 trees, of which only three were felled. The design of the house, complemented by rustic finishes like the exposed concrete on the ceilings, a combination of wood and Athangudi tiles on the floors, is what appealed to the architects. We started from scratch in July 2017 and handed over the project in November 2018. After Arch Daily wrote about the house in January 2019, recognition from various associations, platforms and publications was overwhelming,” he said.

“We used native materials, sourced from the site or from within 50 km and juxtaposed them with traditional aspects of Chettinad region like its colours, fabric and (Athangudi)tiles. We employed local labour and artisans for every aspect of the work, which made the house special.

One national award, five nominations (including four international) and nine articles in appreciation in journals of repute have brought the Madurai architects under the spotlight.

“Yes, it is nice to be recognized by the peers for our work and our passion,” he said and added that now they have given up plans of higher education abroad and concentrate instead on projects on hand. “At present we have individual projects like a central family home, farmhouse, holiday home and we are extremely busy. Not at liberty to disclose names, but yes, some corporate bigwigs are our customers,” he said.

Among the corporations, “we have set up all the showrooms of Tirupur-based electric car company – CK Motors- and are involved with its branding and brand building,” said Vignesh adding that they offer a complete range of projects, from interiors to designing to branding, with collaborative working with professionals from other fields.

From a low-cost holiday home at Rs 15 lakh to another holiday home costing Rs 6 crore, the projects on hand are of different shapes and sizes. “Mostly, the clients are happy with our designs and work we have already done and leave the design, look and ambience to us. But there have been clients who come with fixed briefs, and have different tastes and preferences to cater to,” Vignesh said.

“Yes, all our projects so far have been confined to South India, but we will not mind exploring avenues in north India, in fact anywhere in India,” Vignesh said.

The Chettiar house was a big achievement for Vignesh, whose first major project was in Madurai in 2016 after finishing his college – to transform the abandoned Bharatiyar Park that belonged to the Madurai Corporation.