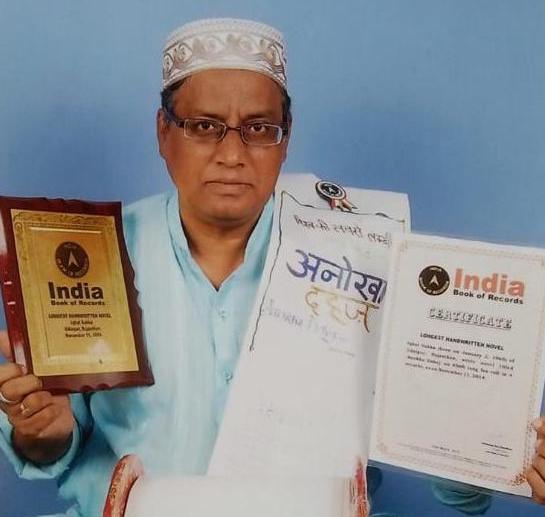 The Man with a Golden Hand

It takes a humongous effort to make the smallest of things.

Ask Iqbal Sakka,  a goldsmith by training and profession, and he will tell you how difficult it is to make miniature gold carvings  – be it the smallest national flag (0.5 mm in size), smallest Inkpot, Pen & Paper set (1mm inkpot, 1mm nib, 4mm pen & 3.2 mm paper), or the tiniest FIFA World Cup Football trophy, golden ashes shoe, and football (football  2mm and 1mm FIFA Golden world cup of width 4mm and height 2mm), and many more that jostle with each other for space, and attention in the collection at his Udaipur home.

The precision need for this work and the patience to get things right is immense, if one needed to create such wonders that find pride of place in global rankings. Much-feted and awarded with medals, trophies and honours from several government, non-government organisations in India, and abroad, Sakka is a rich man when it comes to fame.

Material fortune is something that has skirted around Sakka as he ekes out a living as a goldsmith. “I get only labour charges for making ornaments on order from customers or gold shop owners,” Sakka told Tricity Scoop.

All that Sakka owns is an 8X8 feet room that serves as his family’s living quarters, his workshop, and museum where all his treasure trove is stored.

All his efforts to get help in building a small museum to display all his miniature items, so far have failed. Being a touristy place, Udaipur, would be served well with such a museum to showcase items of mine and of people with similar, and or better skills, Sakka said.

At present, he has at least 70 miniature items that have won global acclaim. He claims to have 70 world and national records in his name.

Recently, he made the smallest khadau (footwear worn by Lord Ram), smallest ghanta (bell) and smallest eenth (brick) and wrote to Prime Minister Narendra Modi that these be displayed at the proposed Ram Mandir in Ayodhya. He received a letter back from the PMO, suggesting he get in touch with the Ram Mandir trust, which he has done, and is wating for a response.

“Always I had this penchant to win awards and make the nation proud. So, whenever I see a chance, I work hard and try to bring laurels to India,” Sakka said on why he kept spending his time on activities that bring him no money.

“I am working with gold, but I am just a worker and get labour charges. It is the shop owner who makes money after selling items we make,” Sakka said. “But I am not too bothered about money, it is the art and craft that I am interested in and always strive to do the best and be the best in the world,” he added.

“Some of the items are so small that you would need a lens to see them. My eyesight is good and I don’t need a lens when making them, and I will continue to work on gold carvings and sculpting till my hands are steady and don’t tremble,” he said.

Sakka is no stranger to awards and recognition. The walls of his ‘workshop’ are lined up with photographs and awards and certificates that he was presented with. Once again, Sakka was among the 40 persons from Rajasthan to be feted at the 40th anniversary of the Udaipur edition of leading publication, Rajasthan Patrika.

Owner of Patrika Group and its Chief Editor Gulab Kothari, once visited Udaipur and expressed a desire to meet Sakka. “I went to the hotel where Gulab ji was staying. He appreciated the intricate work and lauded my workmanship,” Sakka said. When I was leaving, Gulab ji dropped an envelope into my bag,” he said.

“It was only after reaching home that I saw what was inside the envelope – Rs 11,000. Too stunned to react, I thanked Gulab ji in my mind and used the money to encase all my certificates, and citations into photo frames so that they are safe,” Sakka said.

For Sakka, getting featured in newspapers and television channels has been a routine affair. “If you google my name, and ask for videos, several would come up,” he said. At times foreigners do drop in to see my work, perhaps seeing a documentary on my life aired on Discovery channel, Sakka added.