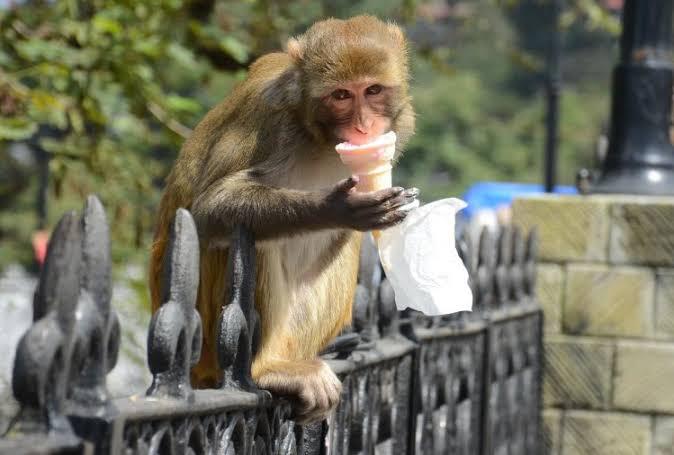 ‘Surrendering’ To Our Ancestors!

By Lakshmana Venkat Kuchi on February 7, 2021

No amount of barricading, or even shoot at sight orders, and other ‘tough measures’ from the administrators of this Himachal Pradesh capital city of Shimla could deter or defeat the army of Simians lording over the Jakhu Hanuman temple located atop a hill.

For ages, these bands of monkeys have ruled over this ‘Monkey land’ and beaten back waves of attacks from human beings to snatch away their territory – either temporarily or permanently.

Any ‘intruder’ into the ‘Monkey land’ – from Mall Road to Jakhu temple – is subjected to a thorough ‘search and seize operation’ under the watchful eyes of guards maintaining a watch for ‘enemies’.

It is a good circuitous 2 km trek up the hill and all through the route there are ‘posted’ groups of monkeys in varying sizes and ages that ‘catch and search all human beings for contraband’ – any eatables being taken upstairs as offerings to Lord Hanuman, the presiding deity.

When I was going up the hillock through the narrow lane, back in the mid-80s, few monkeys came up to me and put me through a scan to detect anything that I may have been hiding.

It was my very first encounter with so many simians, (other than when they were caged inside in the Delhi Zoo), and was beginning to get nervous when a friendly shout out from a well-wisher passer-by – “do not do anything, like shouting or picking up a stone or becoming aggressive. Just submit yourself to the monkeys, and when they are satisfied that you no longer were a suspect, they would let you go.”

For the monkeys, all visitors are “smugglers” (who hide eatables inside their purses and pockets) unless otherwise proven. This vigil was considerably lesser when many monkeys were caught and exported for experiments when animal rights activists howled against that practice and put an end to it.

This frisking – ‘search and seizure’ – continues today as well, and in anything, the bands of monkeys have only grown in menacing numbers. Although these are not known to harm people, there have been some instances of wild attacks on people who “act smart”.

While for people from Shimla it is a nuisance all right, but for the tourists, at times, it becomes a nightmare to navigate the two km distance through the narrow lane with hundreds of monkeys waiting to pounce on them – for eatables. The best advice – ‘bribe them’ by offering a little portion of the eatables and fruits you are carrying as your offering to Lord Hanuman. If pacified by the ‘bribe’ they may let you off easy.

What is perhaps no longer surprising is that the younger monkeys join the fun and are in effect given training in ‘frisking operations’ by the trainers. The locals there have resigned to coexist peacefully with their ‘ancestors’ after a slew of measures to curb the menace have failed. If not anything, the administration seems to have surrendered to the monkeys.

If tourists and devotees are troubled, thus, the plight of the farming community is far worse.

Marauding monkeys, prowling in gangs on streets of Shimla, Kasauli, Chail, Manali, and other tourist resorts create panic among residents and tourists. In surrounding villages, armies of monkeys destroy crops.

They often invade their farmlands and destroy crops.

More than 10 years ago, after different attempts to contain the monkey menace failed, the state government allowed the farmers to get licenses from the wildlife department to “shoot the enemies at sight”. Villagers from Nauradhar tehsil of Sirmour district were among those who sought licenses. But as animal rights groups cried foul, the move had to be abandoned. And then there is a religious sentiment that monkeys are treated as akin to Lord Hanuman and thus not to be subjected to cruelty.

Ten years later, in the year 2018, the Kheti Bachao Sanghash Samiti, farmers body, organized the farmers to shoot the trouble-making monkeys down, but the government prevented this move. At a rough count, the farming community loses Rs 500 crore per annum due to the destruction of crops by animals and monkeys.

The government had also undertaken a monkey sterilization project, a habitat enrichment plantation scheme to name a few. All these have failed to blunt the monkey menace.