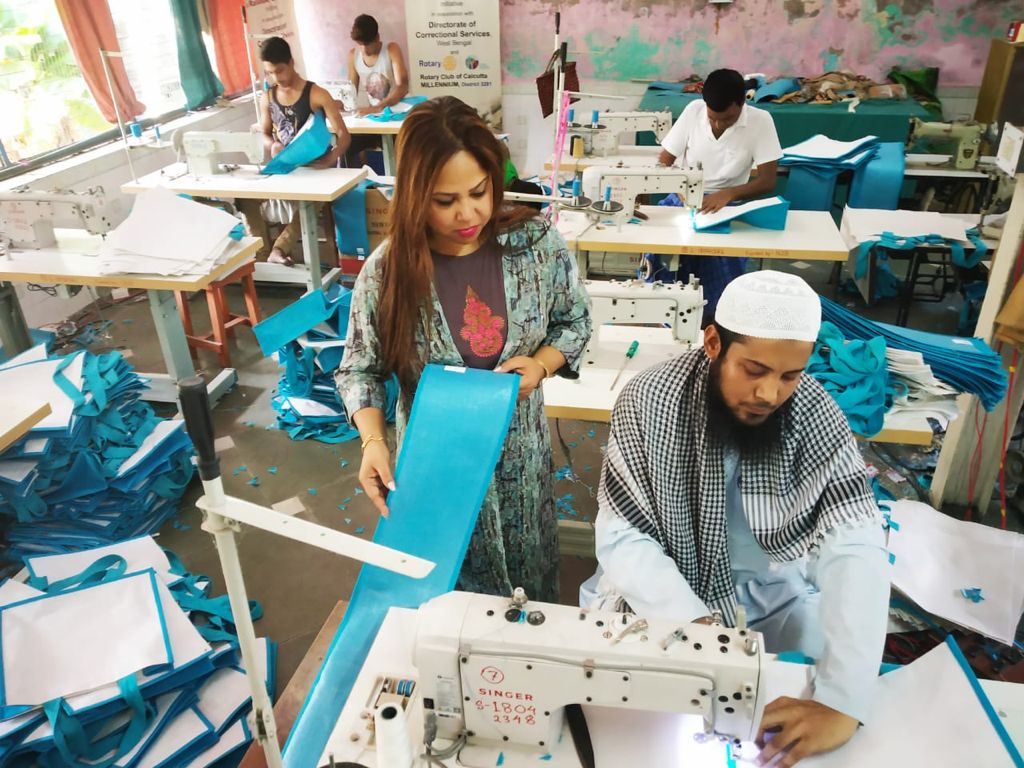 Whenever you see jute, you think of Chaitali Das.

This is how this powerful and progressive business woman from Kolkata has come to be known in West Bengal and beyond — for her efforts over several years  to take the humble Indian jute on a glitzy global tour and planting it in the consciousness of the fashion world.

She is considered as the Jute Revivalist.

Yes, she has globalised Indian jute and made jute creations that have taken the fashion world by storm. Many fell in love with jute for its uniqueness in texture of the fabric and vibrant natural colours it absorbs. Besides, countless creative fashion accessories made out of jute have given it a stature that can only be envied.

Now, when she began working with jute many years ago, Chaitali had no inkling of what it was going to be, other than that she wanted to improve the lot of the rural artisans and prison inmates. A social entrepreneur, she is internationally known as the Jute Revivalist for her dogged determination to take the Jute – a long, soft, shiny bast fiber that can be spun into coarse, strong threads – and make it into a high value fabric for fashioning trendy garments and fashion accessories.

She has advocated and promoted jute, in various prestigious platforms in countries like US, China, Netherlands, Canada, Bulgaria, Czechoslovakia, Dubai, Nepal, Sri Lanka, Thailand to name a few. Chaitali is off to Geneva next month for another international event, where she will launch a documentary “Jute Story Beyond Bars”.

Hailing from a business family, Chaitali was never short of funds to indulge in her philanthropic endeavours – and also, she does not have to ask anyone for money as whatever she earns as a director in her husband’s company goes into this or that welfare activity for the people she touches.

A former Mrs. International, Times Power Woman – Social Entrepreneur 2019, Social Icon of the Year 2021 by Economic Times & HRD India, Social Entrepreneur of the year 2019 By MSME Bangalore, for Chaitali awards are not new. She happens to be the first-ever Fortune Most powerful women, US/ State Department alumna from Bengal.

Whether it is working with prisoners in the state, or with rural artists and artisans across India, she acts in close coordination with both governments. Her organisation, Rakshak Foundation, is empanelled with the National Jute Board of the union Textiles Ministry.

It was in 2016 that she started the flagship project of Rakshak Foundation that she formed to carry out part of the CSR activities of her husband’s company.

“From Behind the Bars to Beyond the Bars” was the slogan I gave to the initiative to revive eco-friendly jute by making it popular as a daily use item. Working with inmates of the jails in West Bengal was and is an effort to reform prison inmates and also skill them in manufacturing diversified jute products,” she told Tricity Scoop and added, “it became a livelihood option that led to their overall betterment.”

Jute Story Beyond Bars has been operational since 2016 at Dumdum Correctional Home and Presidency Correctional Home, Alipore. It is an umbrella project under which various other allied projects are undertaken. Chaitali’s relentless work of promoting and reviving jute has led her to be known as a ‘Jute Revivalist’.

She has a dream of catapulting jute to a startling height. She and her Foundation created the Guinness World Record for the largest jute bag in the world, on the 7th day of January 2021.

“The main objective behind this project was to draw global attention towards Indian Jute and the underprivileged Indian Artisans. This historical feat created a huge world-wide visibility, and conveyed a strong message of a ‘Greener, Healthier & Inclusive World”, Chaitali said.

At a rough count, Chaitali has directly touched the lives of 4.5 lakh people and through her outreach positively affected the lives of over 10 million people.

What is the future?