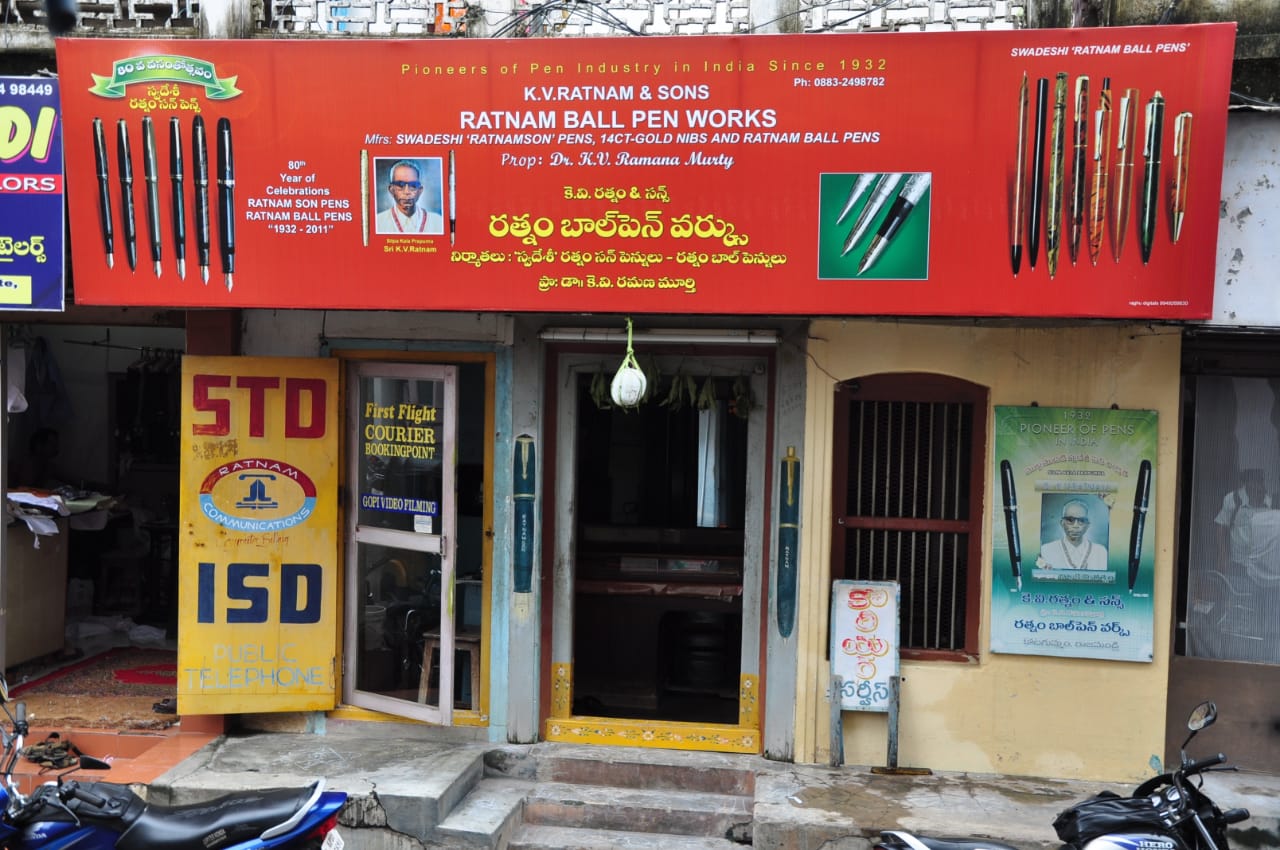 Rathnam, the First Swadeshi Pen to Take on British

By Lakshmana Venkat Kuchi on September 27, 2020

The tiny pen making unit located in a narrow lane of Kotagummam area of Rajahmundry city in East Godavari district of current day Andhra Pradesh is perhaps amongst the first one in India to go completely atmanirbhar and swadeshi, way back in 1932.

It was in 1935 that Mahatma Gandhi accepted Ratnam pen for personal use after its manufacturer Kosuri Venkata Ratnam, hailing from the Viswakarma community, used only domestic materials in its making.

It all began a few years earlier in 1921 when Ratnam, a highly skilled jewellery maker specialising in dies and engravings, met Gandhi ji at Wardha and presented him with a metal engraving at Wardha. Gandhi ji requested Ratnam to make “inexpensive utility items for the common man instead, say anything from a pin to pen”.

After returning to Rajahmundry, Ratnam chose to begin making pens, from out of the knowledge gained after repairing imported British pens belonging to Rajahmundry sub judge, M Krishnamacharya. He also took help from Andhra Scientific Company in Bandar for inputs on materials used in the making of pens.

And thus, began Ratnam Pen Works in 1932 at the Kotagummam area. The first pen was sent to Gandhi ji for approval in 1934. These pens were fashioned after pens made in the UK that were imported and sold in Calcutta (now Kolkata). Gandhi ji rejected the pen after he came to know some material used in the pen was foreign.

It was back to the drawing board for Ratnam to carry out 100% import substitution. It took him a few more months to achieve the objective and he sent out the totally ‘Swadeshi’ pen to Gandhi ji in 1934. He sent the pen through Secretary of All India Village Industries Association, JC Kumarappa in 1934.

On July 16, 1935, Gandhi ji acknowledged the receipt and certified its import substitution content. He wrote in a letter to Ratnam: “Dear Ratnam, I must thank you for the fountain pen you have sent to me through Kumarappa. I have used it and it seems to be a good substitute for foreign pen that one sees in the bazaar”.

After earning the ‘stamp of Swadeshi’ from Gandhi ji, Ratnam and his brother KV Satyanarayana began rolling out pens with great enthusiasm, and success.

Look at the brand ‘ambassadors’ of the Ratnam ‘Swadeshi’ pens.

First Jawaharlal Nehru had visited the factory as did many leaders from different occupations. The VIP customers of Ratnam pen include Presidents, Prime Ministers, and other prominent citizens from many occupations in India and abroad. Pens from Rajahmundry adorned the desks of dignitaries like US Presidents, German Chancellors, Former USSR leaders, royalties from different princely states of India, and media barons in India and abroad.

Most recently, PM Modi, who has one Ratnam pen for himself, gifted one to the German Chancellor Angela Merkel. This pen costs Rs 4,000.

“The payment from Delhi on behalf of PMO was received instantaneously,” K Gopala Ratnam, grandson of Ratnam said. “Today we turn out some 300 to 400 pens a month, depending on the model,” he said.

The cheapest one – student’s model costs Rs 500 and the costliest is priced at Rs 70,000. The cost can be higher, nearly Rs 2 lakh, if more gold and silver is to be used.

Today, there are no workers. “Now only the three of us are working, nine hours a day, to complete the orders we get. My father Ramana Murthy, 78, is still active and does a nine-hour shift with me and my younger brother Chandrashekhar, 42,” he said.

“It is business as usual even now,” he said adding “we may have some pending work of September spilling over. October orders are also in. Our workflow has not at all suffered, luckily,” Gopala Ratnam said.

“We do want to expand operations. We have all the raw material needed to make pens for another four or five years. We also don’t need any loans. Our biggest problem is getting the right kind of people, skilled labour,” Gopala Ratnam said.

“If anyone is interested, we are ready to teach them the work,” he added.