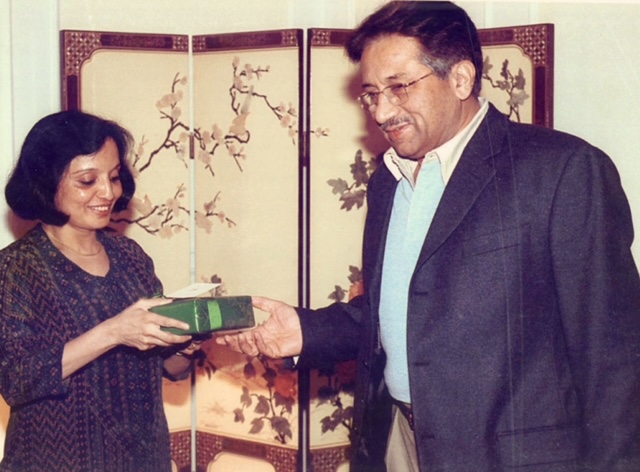 By Lakshmana Venkat Kuchi on January 1, 2022

Malini Parthasarathy, always on the right side of objectivity, truth, balance, and fair play as a journalist of repute and with a strong voice from the South of the Vindhyas, has been honoured by her iconic alma mater – the Columbia Journalism School – with the prestigious Alumni Award for the year 2022.

Today, as the Chairperson of the Hindu Publishing Group she oversees the broad editorial policies of one of the most reputed and oldest of newspapers in the country, The Hindu, and its sister publications in the print and digital sphere.

A person hailing from the extended family that owns the Publishing group, people can easily surmise (even if wrongly) that these high positions of power and opportunities landed in her lap due to dynastic reasons. But she has had to go through the grill – of Morgue duty too (going round of morgues in cities), local reporting, and ‘desking’ like everyone else. Old-timers recall her tenacity and determination of getting things right, and always sticking to all the canons of good journalism, something that The Hindu group takes pride in. It is not for nothing that The Hindu is described as “the journal of record”, for being a stickler for the genuineness of information, correctness of facts, and being brutally objective and truthful in reporting.

As a brand-new entrant into The Hindu as a city reporter for its Delhi Edition, I recall sighting her as the last man standing, late at night – working the phones and typing away her reports when everyone else had left for home.

She took time off from her extremely busy and packed schedule to speak with Tricity Scoop on her journalism journey so far and the future of the profession as technology and digitization has transformed the media industry, causing concern over the longevity of print media. Malini Parthasarathy is optimistic of a bright future for the print media if only it could exploit its unique and inherent advantages over other media and also puts in the effort to improve the quality and genre of its reporting, and gives more importance to storytelling.

Excerpts from the conversation:

Tricity Scoop: Madam, many congratulations on winning the Alumni award from the prestigious Columbia Journalism school. Does this honour put additional pressure on you, an increased responsibility, as it were, as an important voice of journalism in India and the world?

Malini Parthasarathy: Thanks for the good wishes. Yes, it’s an incredible honour and privilege, the Columbia Journalism School is my iconic alma mater, and this recognition has deeply strengthened me as a journalist and media person.

Tricity Scoop: You have worn many hats as a media professional (reporter, desk, managing publications and the group, and also heading the Hindu think tank – on politics and public policy. Which of them has been your own personal favourite role?

Malini Parthasarathy: I have enjoyed every bit of journalism and of course found fascinating the challenge of setting up a think tank on public policy for The Hindu Group. Being a journalist in different roles has enabled me to see different sides of the profession, giving me an opportunity to learn what the challenges are in each aspect of the tremendous process of building a newspaper or an editorial product that is read and appreciated by audiences for both print and digital media.

Tricity Scoop: Since the mid-eighties to the 2020s – how have you seen the media profession growing/changing?

Malini Parthasarathy: There has been a radical transformation of the media landscape, with print publications under increasing pressure as digital media is gaining ascendancy and more and more readers of print publications are switching to getting their news on mobile phones and tablets. Meanwhile, there is serious pressure on journalists as the political temperature has heated up with sharper ideological polarization of political parties. Basic journalistic freedoms are being undermined and journalists are finding it increasingly difficult to function in an increasingly intolerant atmosphere. Now more than ever it is important for journalists to ensure they do not lose faith in democracy or constitutional values and do their duty in reporting truthfully, fairly, and without bias.

Tricity Scoop: Any undesirable change concerns/worries you and what needs to be done to address such concerns?

Malini Parthasarathy: The tendency of journalists to take sides, to take ideological positions, the pressure from Government, political parties, and big business to doctor narratives which does place undue pressure on reporters and editors. It is important that journalists remember basic values and norms and try to steer clear of pressures and report the story as accurately as possible, being conscious of any possible bias and eliminating it. It is important for media houses too to ensure that their pursuit of journalism is not corroded by business or corporate interests. In this regard, there is now an imperative to improve the quality of storytelling and of content creation so that publications can be more independent of Government revenue and exist as market products.

Tricity Scoop: How do you see the future of print media in the wake of digitization and media, in general, going forward, also especially in an age where newer challenges like fake news and deep fakes abound?

Malini Parthasarathy: I see the future of print media as bright so long as print practitioners put a lot of effort into improving the quality and genre of the reporting, of the narrative, and put more emphasis on storytelling. I also think that the future lies in exploiting the inherent advantage of print as a medium, which is not as perishable as digital content, in providing perspective, context, and background for news as it unfolds and becomes part of collective memory.