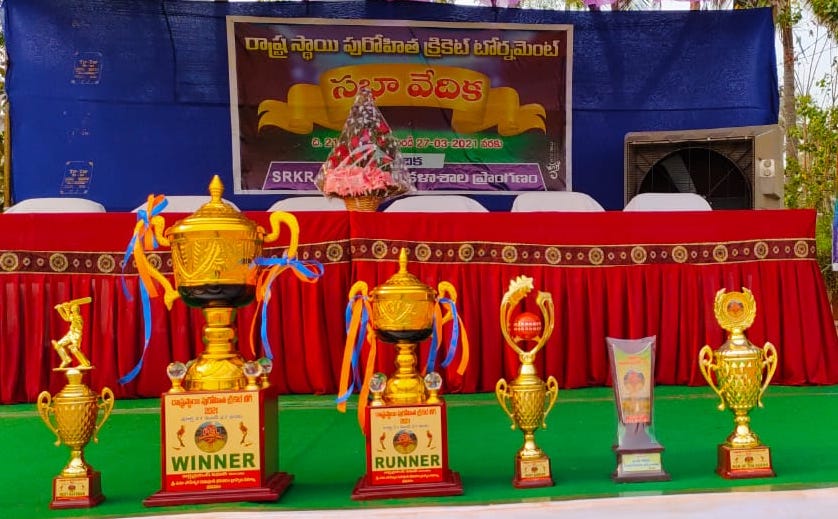 Now, Cricket In Dhotis And Angavastrams

Dancing down the pitch to loft the bowler over the fence for a six. Yes, this is a standard cricketing shot preferred by exciting players in any match. But imagine the sight of the batsman, the bowler, and in fact, all the other 10 players attired in dhotis and angavastrams?

How, and why cricket in dhotis, one may wonder. Well, it is to prove a point that priests can be players too.

Yes, Bheemavaram town in West Godavari district of Andhra Pradesh recently hosted a week-long IPL that concluded on March 28 with Veda Pathasala from Kakinada lifting the crown in the 10-10 over cricket tournament for Brahmin priests.

There has been tremendous enthusiasm among the priests, engaged as temple priests under the endowments department or those who perform marriage ceremonies, yagnyas, and other pujas or conduct rituals in death ceremonies to participate in the annual Indian Purhitula (Priests) League. It has been planned as a week-long cricket tournament exclusively for the priestly community, said Chanduri Kameshwar Rao.

An indication of the growing popularity of the tournament held during maadham (a the time when there are no marriage ceremony muhurtams) and shoonya masam when people do not perform marriage or other puja ceremonies, is that 16 teams from across Andhra Pradesh and Telangana participated in the league stages.

“We just wanted to enjoy ourselves, express our love for cricket, and also entertain the crowds that came to watch the tournament held at a local engineering college premises,” Rao said and added, the college has declared that it would be a regular title sponsor for the tournament. “A team from Karnataka too expressed the desire to participate, but its entry came too late. The league fixtures had already been finalized. Next time, the Karnataka team would also be included,” said Rao, who is a priest at Vinayaka temple in Bheemavaram town.

While the youngest player in the tournament could be as young as 16, from one of the three Veda pathasalas that entered the tournament, the oldest player was a 57-year old Ramana, a purohit from Kakinada temple.

“The boys showed that they were second to none in enthusiasm, style, or stamina. And most of the cricket is what they learned from watching the sport over television. None of the participants had any exposure to real cricket coaching or are ‘players’,” he said and added, every participant is made to undergo an oral test to prove his credentials as a priest.

“We can make out from the way a priest pronounces mantras, and a quick round of questioning is enough to weed out anyone who is not from the priestly profession,” Rao said. No, there were no instances of ‘players’ being dressed up as priests in dhotis, angavastrams to strengthen the teams.

Yes, the desire to win was very much evident in all the 16 teams that participated, but the level of coordination and practice of the three Veda pathasala team members was definitely higher.

“Perhaps, because the whole team studies and lives together at these veda pathasalas,” said Appaji, another priest, an all-rounder for a team of priests from Rajahmundry.

“There are some good players in the Brahmin priestly community and they never get a chance to showcase their skills. This is why this platform gives such an opportunity,” Rao said. Our tournament with limited-overs (10) matches spread over a week attracted tremendous interest from the spectators, and more important, sponsors.

“We gave accommodation to all the visiting teams and took care of all their needs – all breakfast, meals, and tiffins, sponsored by the business community. Each priest managed to bring some sponsor or the other to finance different activities. Prize money for the winners of the finals was Rs 75,000 and there were other title and cup sponsors too.

Locally influential Brahmin priests like Rao, Brahmajyosula Satyaprasad, Brahmajyosula Subrahmanyam and a few others came together to organize the tournament under the banner of the local Bhramana Seva Sangam.

These days Brahmins successfully engaged in priestly activities, who were efficient, were earning as much as software engineers, and live as normal a life as any city dweller would. They have the latest mobiles, laptops and other gadgets and enjoy life, Rao said. But, he lamented, “despite good earnings, not many girls were ready to marry boys from the priestly profession.” But this is another topic, for another day, he said.

Lakshmana Venkat Kuchi, Consulting Editor, is a senior journalist with over three and a half decades experience in the profession at the national and regional level. For the longest duration in over three decade career, he was associated with Hindustan Times for 18 years in New Delhi, Jaipur and Chennai. Email id: kvlakshman@gmail.com & Twitter: @kvlakshman