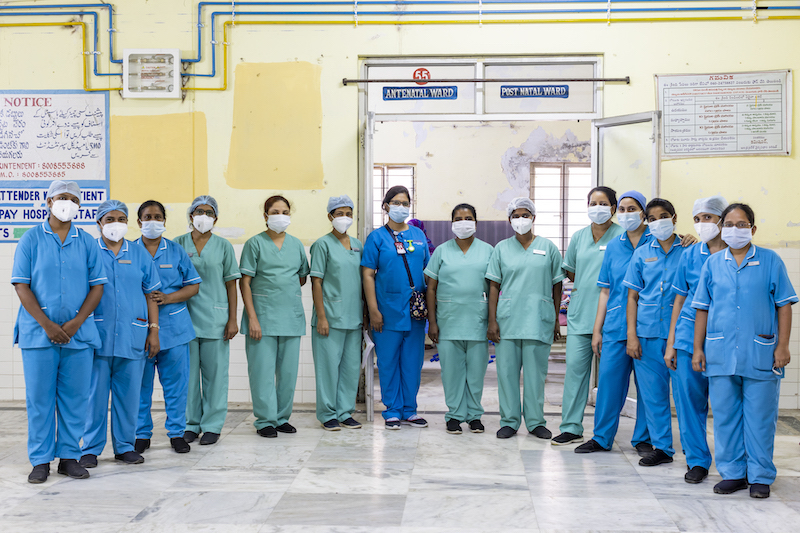 Midwifery: The Key to Save lives of Pregnant Women and Newborns

A visit to any of the Telangana government area hospitals in Hyderabad or in different districts of the state can shock you pleasantly.

The neatness, the presence of doctors, nurses and more important, the machines and medicines that make up hospitals and promise good healthcare delivery are in evidence and seem surprisingly efficient, and adequate. And in much contrast to common perception and image people have of a government hospital, in fact.

Take for example, the Area Hospital of Vanasthalipuram in Hyderabad, a government run hospital, and the well-appointed healthcare centre it has developed into over the past few years. This centre is one of the many in the state that provide superior care for pregnant women, and among those where government is encouraging midwifery as the mechanism to reduce unwanted and unnecessary cesarean deliveries of babies.

Helping the successful implementation of the Telangana government initiative to promote midwifery to help in natural child births and save pregnant women from losing lives during birthing complications are an army of nursing staff trained in midwifery. In fact, these form part of an entirely new cadre in healthcare services delivery mechanism the Telangana government has begun with the help of UNICEF and Fernandez Foundation.

Concerned over the very high percentages of cesarean operations for childbirth, the Telangana government worked with Fernandez Foundation that has been running a very successful midwifery training programme and cut down cesarean deliveries in its hospital drastically. UNICEF too came to the aid of the Telangana government in its initiative, whose success has now prompted the central government to take it up at the national level.

Now, the entire training programme of midwifery is being funded by the National Health Mission of the central government.

The Telangana government has plans to train 1,000 midwives over the next few years and post them across the state to ensure that superior care, comfort, and dignity to pregnant women that they deserve and give them a happy birthing experience. The amount of special care, companionship and support midwives can give, cannot be replicated by doctors who do not have the time for it, said Dr Evita Fernandez, chairperson of the Fernandez Foundation. A passionate advocate of normal birthing, Dr Evita believes in the need to empower women to make choices regarding issues surrounding birth.

Of late, childbirth has almost become synonymous with cesarean operations, for a variety of reasons – from a business reason to paucity of time for doctors to unscientific Muhurtham (auspicious time) deliveries demanded by parents – which is also dangerous for the pregnant women and newborns.

India has made tremendous progress in terms of medical education, quality and standards of hospitals and health care, but there are areas that still needs our focus and immediate attention – as India is only second to Nigeria in terms of numbers of deaths during pregnancy, many of which are preventable through midwifery, she said.

She is happy that Telangana has appreciated the importance of midwifery and is glad that the government has taken it up in a big way. The success of the pilot project of midwifery training run by the Fernandez Foundation in 2017 has given birth to a national level initiative on this score.

In fact, not so long ago, in 2015 it was observed that Telangana had the highest C-section deliveries at a stunningly high 60.7 percent of all deliveries in the state. Of these, 41 percent are in government run hospitals and a whopping 75 percent in the private sector hospitals.

Another worrying statistic is that Maternal Mortality Ratio (MMR) remains 63 for one lakh births and an infant mortality rate of 26.4 per 100 live births.

These figures are also reflective of the situation in the country with the phenomenon of unnecessary C sector interventions being the rule rather than the exception.

Meital Rusdia, Chief Field Office, UNICEF field office for Andhra Pradesh Karnataka and Telangana believes that this initiative can be the game changer and a sustainable solution to the health personnel gap in the country. She says, “Midwifery is a proven, globally acclaimed intervention that can prevent as many as 83 percent of all maternal and newborn deaths. With this in view, UNICEF has partnered with the government of Telangana and Fernandez Foundation to launch the Midwifery Initiative in the state. The initiative has promoted respectful maternal care and ‘natural births’, thereby also bringing down the C-sections. Telangana has been a pioneer on this front and learnings from the state initiative have fed into the national Midwifery initiative.”