Mr. S Ravichandran, 63, is as common a man as anyone can be from the lovely city of Coimbatore in Tamil Nadu. A city that entrepreneurs built.

But what is so uncommon about him is his never say die spirit and willingness to take on any challenge or embrace any adventure that would put a teenager to shame.

A person who came up the hard way in life, and had rebuilt himself after a major failure which could have broken down any other person, Ravichandran does a full-time job and two part-time ones and also squeezes time for all his passions – music, mountains, and adventure. He is a life member of Thiagabramma Mahotsava Sabha, Paragliding Association of India, and Wildlife and Nature Conservation Trust in Nirgirls.

At 63, he is so full of life and is an inspiration for many from Coimbatore and surrounding areas. All the youth from around there who want to go trekking know that if they caught hold of the busy Ravichandran, their expedition would be a success.

Now take a look at what all he has done – after his printing business (partnership) suffered a huge loss after the Coimbatore bomb blasts of the late 90s, he started from scratch again, doing job orders and rebuilt his business all over again. And he had the good sense to join a cousin when he started a BPO as a manager, and still continue the printing business that he used to do in his own time and pace (that he calls part-time) and also signed up as an insurance agent with a private sector bank, also on a freelance basis.

For someone who would have retired under normal circumstances, his cousin does not let him go and is forced to continue at the BPO, and as he is working anyway, Ravichandran still handles the two other assignments. “All of which boost my earnings, and allow me to pursue my passions – love for music, mountains, and adventure activities,” Ravichandran told Tricity Scoop.

An avid biker, he has ridden up on the highest motorable road in the country in Leh Ladakh at 18000 ft MSL, and has done trekking at Mount Everest Base camp, Annapurna Base camp, and also did Parikrama around Mount Kailash in Tibet, at an altitude of above 18000 ft. Some of the Pilgrimage treks he has been on are Mt.Kailash Parikrama, Amarnath Yathra, Mukthinath yathra to mention a few.

“Trekking gives me a free treadmill monitor to evaluate my health at any given point of time,” Ravichandran said. This is the line he often uses to enthuse people around Coimbatore with whom he gets in touch to go out and trek and enjoy nature and all that it offers.

And then, the adventure seeker in him goads him to the Paragliding spots across India and Nepal and has done several sorties as a Tandem flyer. Perhaps it is these activities that earned him the sobriquet “Roaming Ravy”, from his well-wishers.

Most of the young trekkers from Bangalore to Tirupur and Coimbatore, go to Ravichandran for guidance on routes, topography, and gears needed for trekking tours. Often, he rearranges his work schedules and joins the youth brigade. 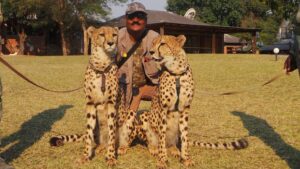 In fact, he also runs WhatsApp groups, Trekkers Inc. and Resolute Rangers, through which he has collected a bunch of enthusiastic trekkers from ages 9 to 90, so to speak. There are students, young professionals, middle-aged persons, and even senior citizens, who share their enthusiasm and experiences. In fact, this association goes much beyond trekking, and often “we find friends for life”.

It was one such acquaintance with Ramky K, a software engineer from Hyderabad who has blossomed into an association that both swear by. And it is an association that is now many years old, during the course of which Krishna has been “converted” from a total vehicle man into a trekker of sorts.

Already, Ramky has done trekking at altitudes of 8000 ft and higher, and Ravichandran has plans to take his software engineer friend into further high altitude climbing at Leh, when traveling restrictions ease after Covid 19 wave subsides.

Other than individual trainees that he mentors, Ravichandran has so far kept in abeyance requests from local universities as the motivational speaker that he is. “Yes, I am now planning to focus on lecture series, so that I can pass on the lessons that life has taught me,” Ravichandran added.

Perhaps, from the next academic session, once “We beat Coronavirus and banish it completely from our lives,” he said.