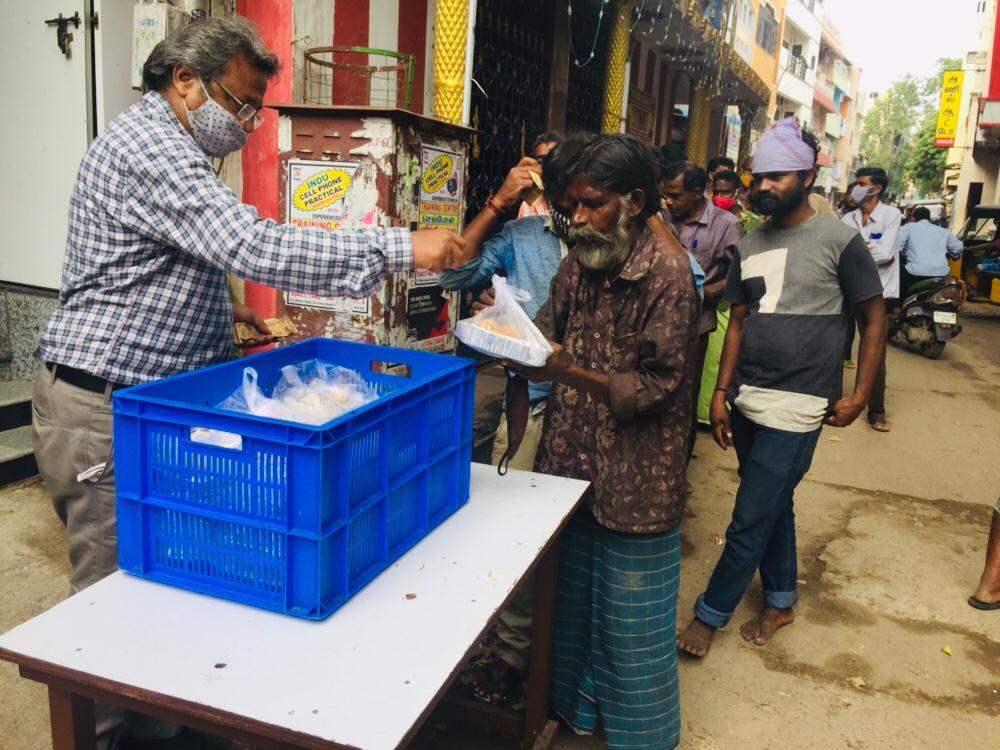 At a time when the media is being viewed with increasing suspicion for spreading hate and fake news, inspiring tales that it brings into focus from time to time is what restores our faith in the newspapers.

It was the much-derided social media that came as a saviour of an old couple running a dhaba in Delhi, who were bombarded with love, money and business once their struggle went viral on Twitter and it moved people into doing good.

Proving that media, print, television or social media, still does some good work, is an inspirational tale about a 91-year-old Ramu Thatha of the temple town of Madurai, a phenomenon in his own right, that Tamil Nadu papers used to write now and then.

In July this year, the entire Tamil Nadu media mourned his passing away. A runway as a child, S Ramu (Ramu Thatha) had worked with roadside eateries, saved some money, and started an eatery in 1965 with the sole aim of feeding the poor. At first, he was selling tiffin – idlis, vada, appam and tea, for just 10 paise and later on began serving full meals for Rs 1.25 per meal.

Over the years, the quality was maintained. He increased the price of meals only twice in all these years till the canteen closed six months ago when he fell ill. In 1975, the price of meals was Rs 6 and it was raised to Rs 10 in 2014.

He was known to almost everyone in Madurai as the Rs 10 meal by Ramu Thatha was featured all across the Tamil Nadu media and, when he passed away in July this year, the media mourned his death and wrote about him and his penchant for feeding the poor.

In Chennai, Mukesh Khubchandani read the news about Ramu Thatha and felt inspired to do something similar. An electronics trader – imports and exports – of repute at Ritchie Street, semi-retired at 70, Mr. Khubchandani thought to himself that he must replicate what Ramu Thatha did. Within a month of reading the news, he began rolling out a Rs 10 meal from the kitchen he set up at Ritchie Street, the electronics and consumer durables market of Chennai.

“God has given me so much that I can easily afford to feed the people free. But if given free, people do not value it and food is wasted,” Mr Khubchandani told Tricityscoop over the phone from Chennai. The Khuchandani family had moved to Chennai in 1972 from Delhi, where they still have a house and office. His two sons now look after the business.

“I was really inspired by Ramu Thatha and thought, if he could do it, I can surely do it. I do not need money, as I have been successful in business. All I needed was to find a few good people to help in cooking and carrying out the operations. On August 13, the birth anniversary of our family Guruji, I started the kitchen with the blessings of God. Today, we sell 400 packets of lunch every day, each costing just Rs 10,” he said.

“After the COVID pandemic is over, I intend to open a dining space with good ambience. Here lunch would cost Rs 30, but takeaways will cost only Rs 10. The lunch contains – 465 grams of rice, one vegetable, sambhar, rasam and buttermilk. The quantity is more than sufficient for the people who queue up to buy the packets,” Khubchandani, who is also the president of All India Electronics Association, Chennai, said.

What began with 100 meals per day has today reached 400 meals per day. Preparing the meals – purchasing groceries, vegetables and setting up the kitchen and finding the cook – is one operation. But more difficult and tedious is the packing, with five items to be packed separately to form one meal. At today’s numbers, each day 2000 packets have to be prepared and then each meal, comprising five packets, needs to be bunched together for giving out to buyers.

At present, there are two persons for cooking and four others to help in packaging the prepared food.“Many people have come forward with offers of help and money. I tell them I don’t need them, but ask them to open similar outlets in their respective areas so that more people can be covered,” Khubchandani added.

Lakshmana Venkat Kuchi, Consulting Editor, is a senior journalist with over three and half decades experience in the profession at the national and regional level. For the longest duration in over three decade career, was associated with Hindustan Times for 18 years in New Delhi, Jaipur and Chennai.