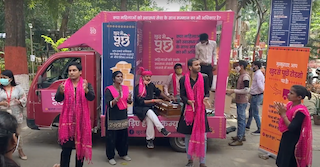 Helping Women help themselves get an Effective & Dignified Healthcare

Nowadays there are confluences of development activists, theatre artists, musicians, and the common woman taking place in several cities of Bihar – with the objective to help themselves achieve greater, deserved dignity in women’s healthcare.

Catchy music, local language enrich the flavour of the happenings at the congregations where ordinary women are finding their voices as they discover that it is they alone who must fight for their basic dignity and right to adequate and appropriate healthcare.

It is with a purpose to organize women into a potent force of self-aware fighters for their rights, a women-centric campaign “Khud Se Pooche” launched several programmes in Patna and other cities of Bihar. At a rough count, already in Patna 250 women enlisted themselves and joined the ambassador programme of the campaign, scheduled to tour across 20 cities and towns of the state.

The organizers consider this itself as a big achievement, as in Bihar women find it very difficult to have their own way, whether it was social, economic, or business spheres.

Khud Se Pooche, a group that works on issues relating to women, launched the roadshow “Garima Express” which travels across the state – and it is part of the campaign’s core initiatives to help women acknowledge, recognize and build self-awareness on healthcare. Theatre artists from the National School of Drama, and activists present catchy skits and hold story-telling sessions to start conversations on this topic, with the local women.

The women in the audience are also encouraged to ideate their versions of care and respect in health services and are encouraged to mark their expressions on canvas.

Artist Princess Pea now works with Khud Se Pooche, and helps women ‘ambassadors’ on their journey of self-reflection through leveraging their creative talents. The sessions help lower inhibitions in them and encourage them to share their personal narratives.

It is really something worthwhile that is happening in Bihar, feel few young volunteers from Delhi who interact with the Bihari women.

Over the years, though access to women’s healthcare services has significantly increased, conversations around the quality of care, specifically dignity in health care, are almost non-existent. While accessing health services, women and young girls are often judged or disrespected, and not provided with the right guidance, and are thus unsafe.

“Women and girls usually have a very basic knowledge. These are life-changing decisions – from becoming a mother, to when to become a mother or period-related health. Sometimes because of a lack of full information, we are unable to feel connected to our body and our decisions. We need to express ourselves, so we can be aware, women around us can be aware and we can talk to healthcare providers without any hesitation or judgment, and start receiving good quality of care”, said Priyaswara Bharti, a youth leader from Patna and an Ashoka Young Change Maker.

Khud se Pooche hopes to empower ambassadors (the attendees) to understand and articulate their needs for better and more effective health services. It has invited women between 18-30 years to participate in the programme, and if the response is any indication, the campaign has already begun to make a difference, Priyaswara Bharati said

The ambassador programme will form the core of a series of initiatives developed by Khud se Pooche. The other initiatives are series of roadshows, talks, workshops, and artistic installations. Digital storytelling forms an important aspect of the campaign as is the training to use social media to push their narratives.

Developed as a women-led collective movement, Khud se Pooche is led by organisations including Sakhi, Gaurav Gramin Mahila Vikas Manch and a Patna based youth collective led by Ashoka Young Change Maker. The campaign is also garnering support from other organisations such as BihArt, Centre for Catalysing Change, Population Foundation of India, Lion’s Club of Patna, colleges, and other groups.

Suman Singh, secretary of Sakhi Bihar told Tricity Scoop, “inherently, women’s healthcare with dignity should be the right of every woman, this should be valued and given attention, not only for women of today but also women and girls for the generations to come.”