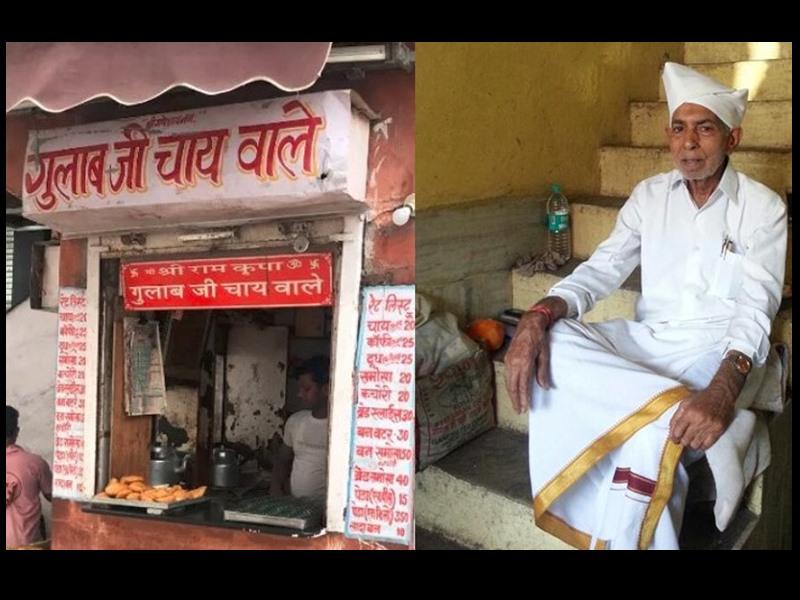 By Lakshmana Venkat Kuchi on September 6, 2020

As far as chaiwalas go, Jaipur tea seller Gulab Singh ji’s life is seen to be an inspiration for many.

The entire Jaipur city and his countless admirers around the world grieved and paid homage when he passed away at the ripe old age of 95, earlier this year.

Even just before his death, he was sitting at the shop, making tea, and serving the customers, like he has been doing since 1946 when he started out with a ‘thela’ (cart) outside the main gates of All India Radio on Mirza Ismail Road of the Pink City.

His tea and bun maska were good. Most of the Jaipur’s who’s who had at some point in their lives visited the stall located in the parking lane of Ganapati Plaza near Amrapura dharmshala.

Politicians, businessmen, social activists, journalists, and students besides the countless tourists – domestic and foreign – were regulars at his stall that was in operation for nearly 70 years. After his demise, his grandson, Chetan Singh and other members of the family run the stall.

“Even today, we serve free tea and bun to around 250 beggars as per dada ji’s wishes,” Chetan Singh told Tricity Scoop in a conversation over the phone from Jaipur.

Recalling the life of his dada ji, he said, “Gulab Singh ji used to get up at 3 and open the shop by 4.30 and ready the kadak chai by 5 a.m. to begin serving the queue of beggars that lined up on the parking lane.”

Belonging to a Zamindari Rajput family from Sarna Chod village on the outskirts of Jaipur, dada ji always wanted to start a business. He began as an employee at All India Radio office on MI Road in 1946 and worked for only one month. “After he got his first-month’s salary, he decided to quit and started making and selling tea on a thela, outside AIR main gate,” Chetan Singh said.

And ever since then, there was no looking back.

“None of dada ji’s relatives supported him and berated him for doing something that was beneath the dignity of the family,” Chetan Singh recalled. “But today, every one of them take pride,” he said.

“After a few months outside AIR main gate, dada ji moved to a space under the staircase of a building on MI Road and had his stall there for some 60 years. It is only during the last 8 years that the stall is at the current location – near Amrapura, behind Ganapati Plaza,” he said.

Chetan Singh, a post-graduate from Rajasthan University, takes pride in being known as a tea-seller.

“Today there are three outlets of Gulab Singh ji, and the biggest and most modern one, located two km away at Collectorate Circle is the one I have developed,” Chattan Singh said.

Recalling the rich and famous visitors to the stall, he said, “dada ji used to tell me, barring former CM Vasundhara Raje Scindia, almost every other politician in the state has had tea at our stall, including former CM Bhairon Singh Shekhawat and present CM Ashok Gehlot.”

“It is only at a walking distance from the UNI office in Dhuleshwar Garden and three-four of us would walk to the place. After 10 am, it looked like any other tea joint though in the morning the scene was different. Different because apart from the regular customers-morning walkers, passersby, there would be a long but disciplined queue of those who would be the guests of the tea stall owner, for a cup of free tea and a bun!” Sebastian said.

“Maybe, as journalists, our fascination for this place was also due to this factor; even when he himself was a small entrepreneur, the tea stall owner was large-hearted enough to serve the poor and needy,” Sebastian added, reflecting the sentiments of many of Gulab Singh ji’s admirers.

“Some politics may also have been cooked up during early mornings when Congress leaders like Ramkrishna Verma, Former Minister, and Shiv Charan, Former Sports Council Chairman, had their first cuppa at Gulab Ji’s,” Sebastian commented.

Mr. Lakshmana Venkat Kuchi is the Consulting Editor of Tricity Scoop. He is a senior journalist tracking social, economic, and political issues across the country. He was associated with the Press Trust of India, The Hindu, Sunday Observer, and Hindustan Times.