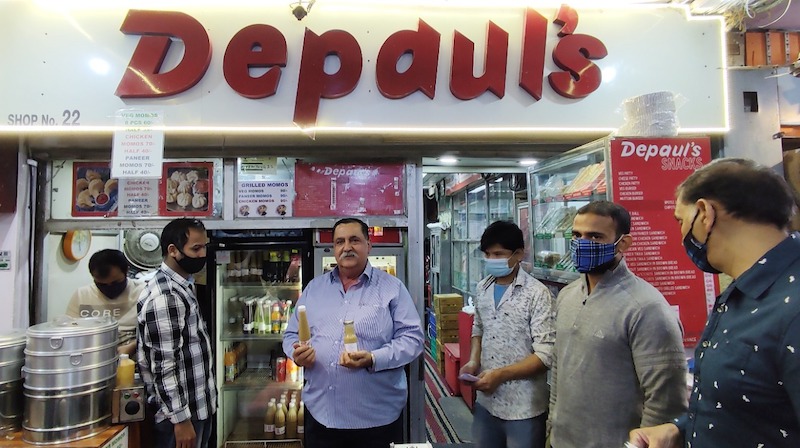 Breaking News is not something one associates with nostalgia – about and of Depaul’s, Delhi’s original, first and only hangout in the early 70s, that also taught Delhi how to drink and appreciate Coffee.

But yes, give me a few words and I will break the news that is sure to warm the cockles of all the Depaul’s fans, spread all across the globe – and among them the likes of King Khan, yes The Shahrukh Khan who used to frequent this Coffee joint even as a student from Jamia Millia Islamia and also after getting noticed in the Television Series – Fauji that made him into a twinkling little star before he went to the Bollywood to try his luck in films.

If you are standing in front of the Coffee joint – Shop No 22, Janpath Bhavan, chances are King Khan may have stood just on that very spot with a cup of coffee in his hands and a cigarette dangling from his lips, a few decades ago. “Shahrukh used to be a regular here, even after he became a star for Fauji,” said Ashwani Kathpalia, 64, son of late Dharampal Kathpalia who opened the Coffee joint on Janpath in 1969.

Earlier the shop was on the main road and later shifted to the present location where it has been all these years and continues to thrive. 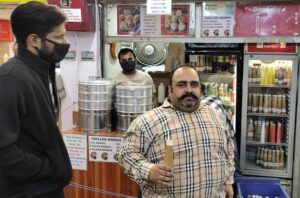 Over the years, the taste of Coffee has remained just the same. When asked, Ashwani said “Depaul’s and Pepsi don’t reveal their formulas” and added, “it is all the love and affection that goes into the making the Coffee that you drink, and above all the love that our customers continue to bless us with.”

“Why, even Rajiv Gandhi, then a pilot with Indian Airlines, used to stand in the queue to get his Coffee and would politely brush aside any suggestions to jump the queue and that his cuppa would come to him,” Ashwani said launching into his own nostalgic journey with the family shop. Himself a student of DPS Mathura Road, Ashwani might have become an army officer, like a few of his classmates, but then had to join the family business.

Does he regret missing serving the nation thus? No, comes the instant reply.

He does not admit it, but one can detect a tinge of matter-of-fact sadness for a fraction of a second. But then in a flash, the ever-smiling handsome face is what greets you as he gesticulates orders to the staff in the shop.

Now you may ask what is the Breaking News? Here it comes: Depaul’s is going national. Yes, you have heard right, all the die-hard Depaul’s Coffee fans in the big cities across India are about to be served their favourite beverage where they are living.

Ashwani said research is in the final stages for a variety of Cold coffee preparation that increases its shelf life to up to six months – which will make it easy for us to market it across the country. Hot Coffee formulations too will be done there, he said.

“We already have some serious inquiries from places like Hyderabad, Ahmedabad, Bangalore, Mumbai, and Kolkata,” he said and added, “We are going to launch the sale of Cold Coffee in these cities shortly.”

Whether it is Madhusudan Srinivas, till recently senior editor with NDTV, or Maitreye Saha, an author, or Sunny Sebastian, ex-Vice Chancellor of a Media University in Jaipur, or Debarati Mukherjee now in Canada, the taste of the Depaul’s concoction continues to linger on the memory of their tongues. 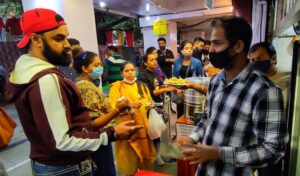 “We buy the Coffee powder from established brands, but the way we brew it is unique to us—a recipe handed down by my father, which will stay on in the family. Into this process we mix a lot of love that perhaps makes it tastier for the hundreds who throng the place every day,” Ashwani said.

Today the outlet has a plethora of offerings to eat – from patties to hamburgers to Momos to rolls and also an assortment of goodies for people of all age groups, shapes and sizes, and locations who congregate there.

“Why the other day, we had Mallika Sherawat visiting us, and there was just no great fuss. She came and had her cold coffee and went away, just like another satisfied customer,” said Amit, who has been working at Depaul’s since 1991.

It is one place where one could rub shoulders with the royalty of Rajasthan like Jaipur Maharaja Karni Singh, or the celebs and the corporate honchos to top bureaucrats, most of whom come to relive a few moments of their nostalgia.

Ashwani said that the regular hot coffee that sold for 75 paise in 1969, when his father started the shop, today costs Rs 35.

Today, Depaul’s Cold Coffee is sourced and sold by different stores in Greater Kailash, Gurgaon, Lajpat Nagar, PVR Saket and Depaul’s is ready to open operations wherever there is a demand.