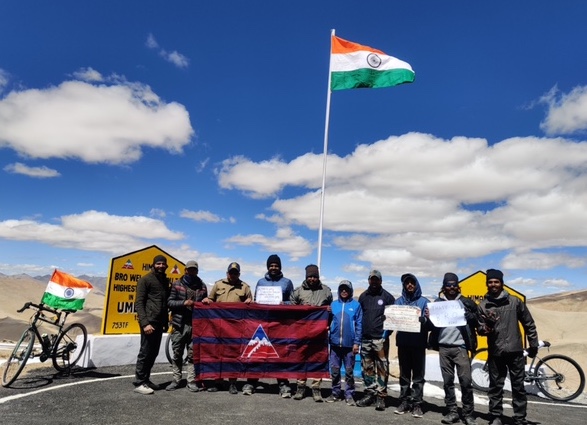 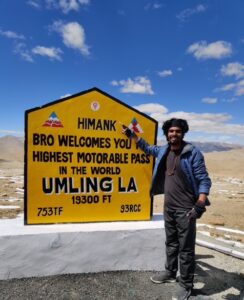 Five cyclists pedaled to and on the World’s highest motorable pass – Umling La (Pass), which is higher than the base camp of Mount Everest – a feat they achieved as part of their campaign to spread awareness on rape, a heinous crime against women.

Incidentally, the Border Road Organisation (BRO) has only recently completed the new road that goes higher than the Khardung La and passes through Umling La pass at 19,300 feet. Piyush Monga, who heads an NGO – Youth Against Injustice Foundation based in Hissar, Haryana, had undertaken a cycle yatra to highlight the issue of crime against women. He was accompanied by another member from NGO Yogesh Rawal, and three other youth joined the team in its campaign for a RapeMuktBharat.

Priyanka, another member of the NGO, said that the cycle yatra through the highest motorable road was made possible by the top officials of the BRO — Lt. Gen. Rajiv Choudhary (Director General at BRO), Lt. Col. Alok, OC, and support of the supervision of Team 93 RCC. She said the entire team was grateful to them for constant guidance and motivation.

BRO had tweeted after the five-member cyclist team reached Umling La Pass on September 15. “These adventurers have come together for a noble cause, raising awareness on rape and child marriage. They thanked the BRO for making this road, calling it an unbelievable accomplishment,” the BRO said in the tweet.

Piyush Monga had earlier in July this year organized a cycle yatra from Hissar to Kargil to Kashmir during the course of which he met the other three cyclists – Akshay Bhagat, Sumit Dangi, and Sanjay Sreekumar – who joined in the cause – of the campaign against rape and crime against women. According to a press statement issued by the Youth Against Injustice Foundation, it has been organizing awareness campaigns for the past few years. The foundation has managed to garner the support of thousands of volunteers from across the country, Priyanka said.

For the cyclists, the yatra to the highest motorable road was not an easy one as temperatures go as low as minus 40 degrees Celsius and oxygen levels are half the levels of the normal areas. They faced extreme difficulties, both mental and physical due to the lack of oxygen, water, and the harsh terrain leading up to the pass.

They did not stop even after falling sick, as they were bent upon completing the yatra as planned, she said. The cycle campaign of Piyush Monga, covering 50,000 km in the past two years, is to conduct awareness programmes, especially in the rural areas of the country. As part of the campaign – Youth Against Rape, it organizes public seminars and public awareness campaigns for social awareness. Priyanka said already, the organization had held some 300, small and big awareness campaigns.

Another campaign of the foundation, the Khushiyan Banto campaign, aims to spread happiness by donating basic necessities for the needy. Tree plantation and cleanliness drives are other activities that the NGO has managed to take up, in which youth participate in large numbers.

But, YAR is on a mission mode to fight and make India Rape Free and the NGO advocates the death penalty for convicted rapists and at the same time urges 14 years imprisonment to those who make false rape allegations, in the interests of gender equality.

“Yes, there are instances of fake rape accusations and these destroy the life of the victim. The society should also give equal importance and attention to this problem as most of the times men find it difficult to come out of such situations,” Priyanka said.

The Youth Against Injustice Foundation also tries to help the rape victims to the extent possible.