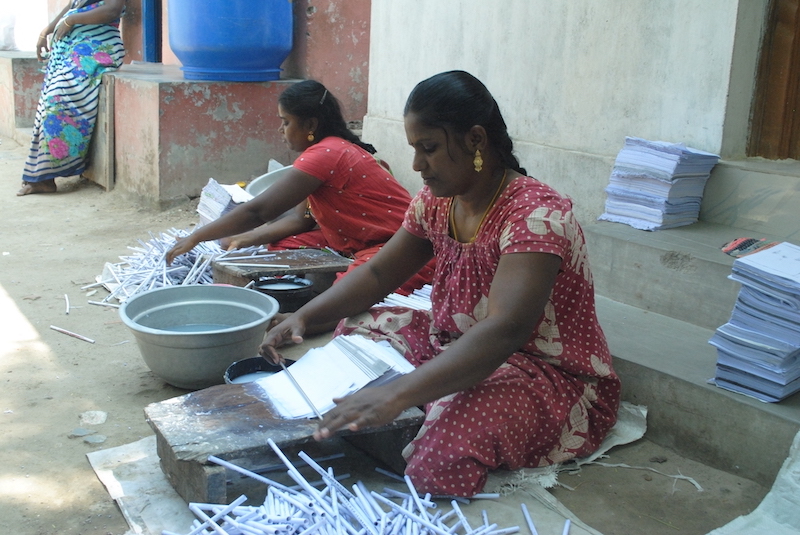 Cracker of a Chance: Sivakasi Fireworks Can Capture World Market

When the United States of America was about to celebrate its 200th Independence Day (Fourth July) in the 70s, labourers at Sivakasi, the hub of firecrackers manufacturing of the country located deep in Southern Tamil Nadu, also joined in to pack off two shiploads of sparklers to the US.

Cut to half a century later, Sivakasi is still on the minds of the Americans as Biden-Harris team’s January 20 celebrations. However, stringent export regulations, rules and restrictions are coming in the way of firecrackers exports from Sivakasi that is dying a slow and certain death due to restrictive bans on sales of firecrackers in several states over pollution and atmospheric degradation concerns; and hence the country’s largest firecracker manufacturing centre is unable to tap the demand for its innovative sparklers and firecrackers from the foreign market.

“We keep getting inquiries from American and European markets, but are unable to export due to logistical reasons as stiff regulations govern the hazardous industry,” lamented P Ganesan, President, Tamil Nadu Fireworks and Amorces Manufacturers Association (TANFAMA).

His company has orders worth Rs 48 crore from the United States, but he is unable to execute this because of tough conditions for getting clearances.

Ganesan told Tricity Scoop that it was perhaps the best time to cash in on this situation as most countries want to move away from China. It is the biggest exporter of firecrackers in the world. “At the last count, China was exporting firecrackers worth between Rs 7,000 to Rs 8,000 crore, which can easily be targeted,” he said.

Export market and marketing can be the practical solutions to address the plight of the Sivakasi firecracker industry enveloped by uncertainty. “With the world trying to move away from China, if Sivakasi gets a favourable look in from the central government, we can easily become the single source of firecrackers,” Ganesan said.

“For the past two decades or so, exports of firecrackers have come down drastically for two reasons – first shipping is an issue as most ocean liners are wary of carrying hazardous materials and secondly to reach Europe or America, Indian produce has to be shipped to Singapore and from there it is loaded to different ships and this makes the process cumbersome and also expensive. Which is why China has an advantage.

“If the central government works with the Sivakasi firecrackers industry, India can replace China,” he said. Many serious enquiries are coming from overseas, he said adding “our green crackers that emit less smoke are attracting more attention.”

A significant success in the export market would mean a fresh lease of life for this small town of Sivakasi, located in Virudhunagar district that has a hot and dry climate that is just suitable for the firecracker making industry. Home to 1070 registered firecracker units, Sivakasi and its surroundings also house several unregistered units.

Along with firecrackers, Sivakasi is also known for its printing technology and matchbox industry. But the majority of its workforce depends on the firecracker industry for livelihood and sustenance. What the spate of firecracker sale bans over the past few years have done is to destroy this sector, with over a half of the unit’s closing.

The fate of some 8 lakh workers, directly and indirectly, engaged in the firecracker industry, hangs in a balance and most of them have lost jobs and livelihood.

Ache din for Sivakasi can be round the corner, but now, it certainly needs an understanding government that is willing to give a push to this Swadeshi sector.

According to market sources, Sivakasi manufactures firecrackers worth Rs 2,500 crore and its retail sales totals around Rs 6000 crore.

This year, firecrackers were despatched to dealers in India, who are now staring at huge losses. They will now be unable to pay the manufacturers. “Usually, within a month of Deepavali, the dealers pay up the full amount. But this time, they will not be able to after-sales were banned in many states,” Ganesan lamented.

Other than exports, Sivakasi can also focus on products that are used in the training of security personnel that are already being manufactured in some of the units.