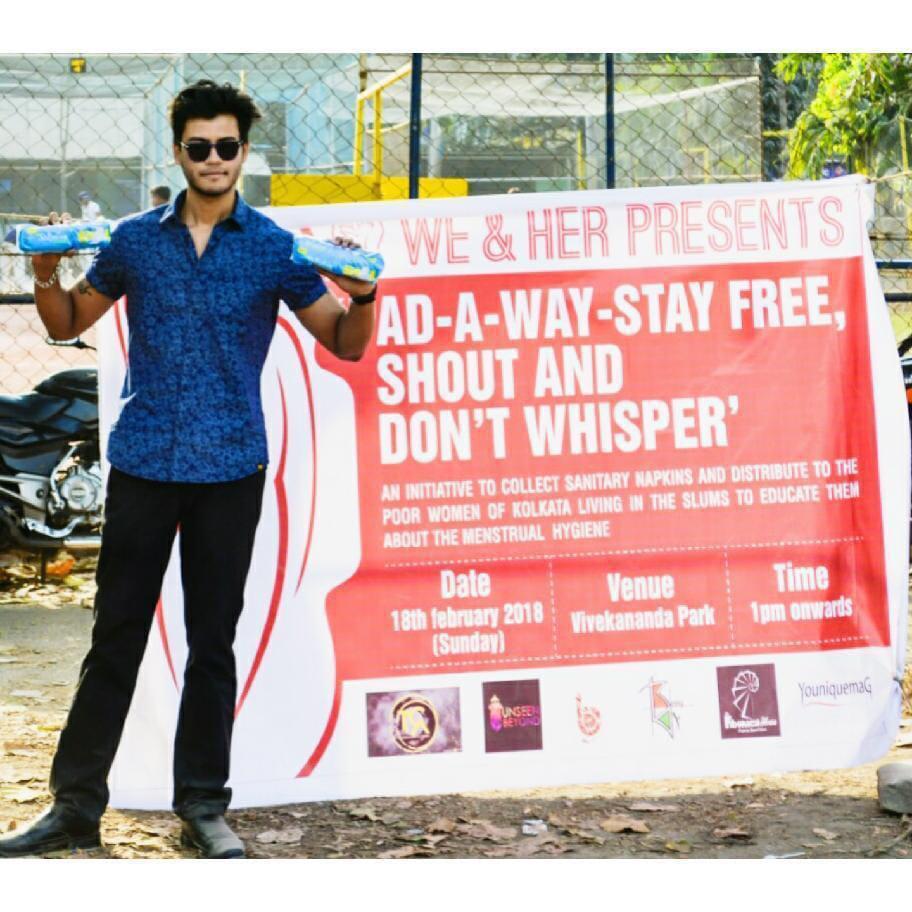 By Lakshmana Venkat Kuchi on November 7, 2021

Often, as a popular advertisement tagline for a mobile phone service proclaimed, an Idea can change your life. Or for that matter spark off action for a good cause.

For a young communicator, engaged in the periphery of the film world, it all was sparked off by an idea – in fact, inspired by a film he saw.

Subhojit Ghosh, an Entertainment Show Host/Emcee, Talk Show Host, and voice-over artist, it was the Akshay Kumar starrer Padman that got him thinking. “Of doing something similar, in a few poverty-stricken areas of Kolkata,” he said.

At that time, just a student of masters in marketing communications in Kolkata, Subhojit got influenced by the movie and thought up of an initiative – Pad-A-Way, to popularise the use of sanitary napkins among the girls from lower strata of society.

“I remember clearly that Akshay Sir’s Padman had released back then and he along with many other celebrities were posting promotional videos holding sanitary napkins in hand to put out the fact loud and clear that there’s no shame in talking about it in public,” Subhojit told Tricity Scoop on how he chanced upon an activity that later on became very dear to him.

“While I found sense in celebrities doing it to influence others, it didn’t make sense for me to see common people do the same on social media since the target audience, the poor women and rural area ladies won’t be reading them. That’s when I thought that I should act rather than just speak or post,” he said.

This is when Subhojit acted. “It all then unfolded one after another,” he said, recalling how he gathered around his close friends and spread the word in his circle. But more important was to begin the work on the ground, which started by taking permission from local authorities for conducting programmes in the public park,” he said.

“I took the permission from the local police station followed by getting permission from the local club committee head to utilize the Vivekananda Park space in Kolkata for the same. Everyone supported me. And later, to get the support of Mrs Sunanda Mukherjee, (ex -Chairperson of Women’s Commission, Kolkata) meant the world to me. Special thanks to ma’am. The idea originated in my mind, but it was absolutely impossible for me to pull it off without the support of my friends & some of their friends,” Shubhojit said.

As students, it is easier to think of ideals and causes as compared to when one joins the rat race of professional life. And in Subhojit’s case too, his entry into the professional communications world meant his work on causes took a backseat. Well, not permanently, but devoting a lot of time and energy towards campaigns for causes had become a bigger challenge now.

Though not on that scale, in terms of time spent and physical activities on the ground, Subhojit continues to do whatever little he can. At present, he is anchoring a film-based programme on a very popular Youtube channel that is frequented by most of the stars. His interviews with the likes of Vidya Balan or Tapsee Pannu have had a huge number of hits and also received rave reviews from his growing audience.

Based in Mumbai, the lockdown saw him going off to Kolkata and later to Bengaluru where he is working at the moment. But, it is definitely back to Mumbai the moment he finishes off some of his personal family chores.

“Though I didn’t get much time after the Kolkata Pad-A-Man initiative to take up other causes, as I have been really busy with work in different cities. But in the near future, I would love to do something like this again and maybe on a bigger scale. The intention is very clear.” And perhaps, Subhojit is more equipped and resourceful now that he has expanded his network in the film world and the creative arts circles.

He takes his job as Entertainment Anchor/Emcee, Talk Show Host, Voice-over Artist very seriously. His close friend and core member of his Pad-A-Man initiative, Arundhati Chakrabarti from Kolkata are sure that they would be collaborating on similar activities sooner, rather than later.

“Pad-a-way is an experience I will forever cherish and be proud of. It wasn’t just one person, but everybody together made it a success. The unity and the happiness and relief on the faces of the people we provided Sanitary napkins too, made it all worth it!” Arundhati said in an email interview. The initiative by my friend and confidant, Subhojit Ghosh, meant endless meetings, phone calls, coordinating with other participants, and generally doing everything.

“I still remember every bit of our activity, even though it was a couple of years ago, just like it was only yesterday. I do hope I get more opportunities to do something good for whoever needs it,” said Arundhati, a designer and content creator.

“For me, being an influencer is much more than merely posting fancy pictures and beautiful locations. It also includes helping the needy, as and when I can,” she said.

Lakshmana Venkat Kuchi, Consulting Editor, is a senior journalist with over three and a half decades experience in the profession at the national and regional level. For the longest duration in over three decade career, he was associated with Hindustan Times for 18 years in New Delhi, Jaipur and Chennai. Email id: kvlakshman@gmail.com & Twitter: @kvlakshman