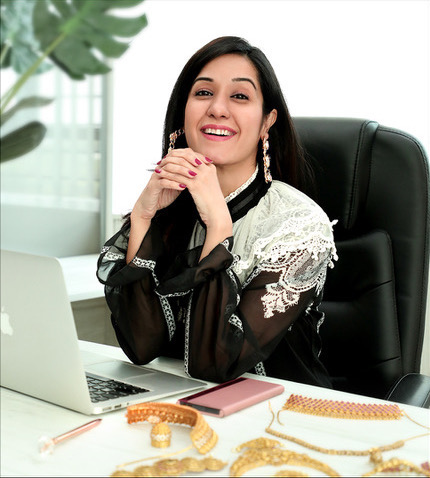 Today she has MBAs with huge packages working under her. Designers from the National Institute of Fashion Technology too. And she has ended up in the glitzy, glamourous world of fashion, or rather a fashion accessory world – in a happy contrast from the platform of Bombay Central she ran away to, some 25 years ago.

As a headstrong teenager, Chinu Kala, ran away from home with just a change of dress and Rs 300 in her pocket after a massive quarrel with her parents in the late 90s. It was sheer luck that a middle-aged lady saw her, sobbing and shivering the second night, and when she came to know she ran away from home asked her to go back.

But this foolishly brave 15-year-old was sure that going back home was not an option.

Then the lady took her to her employer and got her a sales girl’s job that got her commission on every sale of knives. Chinu discovered on day one itself, that it was terribly tough to make even a single sale, in contrast to what she was made to believe at the factory.

After four or five doors slammed on her face, she ran out of the building in the Ghatkopar area and nearly gave up. But soon took a deep breath, and made a promise to herself that she will not get out of the building without making at least one sale.

“I must have knocked on 20 doors, and one lady bought the knives set. I made Rs 20 on the sale, my first earning, and I bought a vada pav and had money left. And I gained in confidence and soon I was encouraging others as well, who felt down and sad,” she told Tricity Scoop.

For two years, she was into these sales on commission jobs. Then she got a chance to work as a waitress in a restaurant, which she said she gladly accepted, “because I could get full meals there, and it was a big thing for me to be able to afford three full meals a day.”

From the restaurant to a garment showroom was her next switch, to try something new and learn. “I was very good at PR and used to smile and talk to people and engage them in conversation and finish sales. I was the best salesgirl in the showroom,” she said.

One thing led to another and she shifted to Surat, for work, where she met her husband to be. She got married to Amit Kala, an MBA who was working as an associate director with News18 at that time, in 2006.

After marrying him, her friends goaded her to participate in Gladrags Mrs India contest, which she did with little enthusiasm. But her photos got selected and she reached the last 10 rounds. Though she did not win, she got introduced to the world of fashion and knew what she wanted to do for the rest of her life – as an entrepreneur in fashion accessories – jewellery.

Her entrepreneurial journey began with a gifting company, and later she moved into artificial jewellery and launched her own brand – Ruban Accessories. Her company today is worth Rs 100 crore and she employs some 60 people.

The lowest salary in her company is Rs 20,000 per month, which is many times more than her first earnings for the month when she went around Mumbai city as a sales girl selling knives and coasters.

In fact, Chinua Kala, founder Ruban Accessories dons’ other hats as well – a socialite, model and one of the prominent faces in the fashion jewellery business in the country.

Did she go back to her parents?

Yes, she did after three years of running away. But only to meet, but lived alone, and charted her own course. “Yes, I am cordial with my elder sister and brother, and after so many years, we all change. Now, my mother lives with me here in Bangalore,” she said.