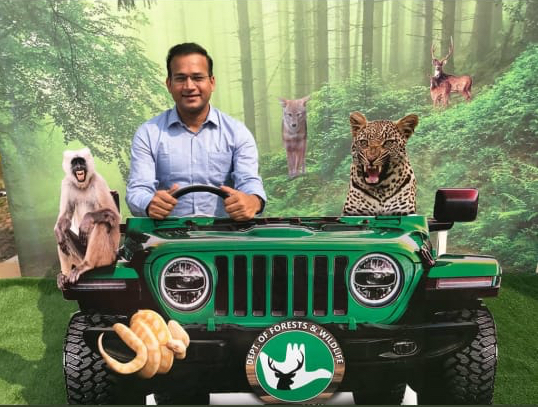 From Humans we always feared, for being enraged,

Today there is no fear when all humans are caged!

Lockdown days have not only brought our lives to a standstill, but has also taught us lessons to last a lifetime. While cities across the world have seen a dip in pollution levels, City Beautiful in the recent days had unique sightings of leopard, deer and peacocks.

While peacocks have been there since ages, city residents had never witnessed deer and leopard. While the first leopard was caught, efforts are still on to trace the other one. Residents from different sectors have been calling the forest department after reportedly having heard its roaring.

Chandigarh has been under curfew since the last few days, and with city roads deserted, these wild animals ventured into the city, which only shows how nature is at its best. Tricity Scoop spoke to IFS officer, Dr. Abdul Qayum, Deputy Conservator of Forest (DCF), UT, Chandigarh, to understand the animal behaviour and what precautions need to be taken if someone comes face to face with a leopard.

“Animals are always on the lookout for solace and solitude and now when city has come to a standstill and there is no movement around, animals feel like it is an extension of their habitat”, the DCF said. Dr Qayum added they venture into the city when they miss their usual path and there have been earlier occasions also when animals have been venturing into the city.

On fake news making rounds on WhatsApp in the city, Dr. Qayum has been making it sure to post latest updates on twitter. He said when second time leopard was reported forensic analysis of pugmarks was done and it was confirmed that leopard like animal had ventured into the city, which was however not seen by anyone.

When asked from where wild animals have been venturing into the city, he said, there is a probability they come from Morni hills or Sukhna Wildlife Sanctuary, which reportedly has 3 to 4 leopards, adding that from the sanctuary leopards can cross several boundaries.

Dr. Qayum when asked about how to respond if a leopard comes face to face with humans, he said, “Children and Dogs are vulnerable when it comes to leopards. Hence, we need to take care. In such an extraordinary situation if you encounter a leopard, it’s better to face the animal rather that running away, but yes seeing the situation one should try to move out from there, he added.

Dr. Abdul Qayum is a B.Tech from IIT Kanpur, PhD from JNU in Bio-Informatics. His current interests are Environment and Climate Change, REDD-Plus and traditional forest conservation practices. He has submitted his PhD thesis in JNU on “GIS Based mapping of antimalarial plants and to identify malarial hotspots”. It includes ethnobotany aspect as well as traditional knowledge based database management of such plants. He has presented a research paper in London, UK during Dec-2012 and attended one workshop on leadership module in Jeddah, S Arabia, June-2014.