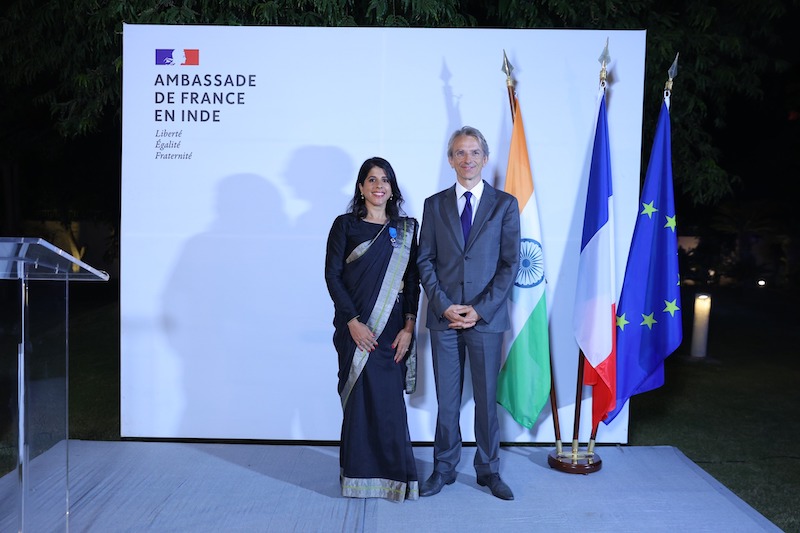 In a recent significant achievement, the Ambassador of France to India, Emmanuel Lenain, conferred the insignia of Chevalier de L’Ordre national du Mérite on the Director General of the Indo-French Chamber of Commerce and Industry (IFCCI)/CCI France-Inde, Payal S Kanwar.

Hailing her roots from the City Beautiful, Payal was honoured for her unconditional contribution towards promoting economic and bilateral relations between India and France, while also nurturing the French business ecosystem in India.

In an exclusive interview with this trailblazing woman, we explore more about her humble beginnings that ignited her interest in the French language and culture, and what led her to this glorious triumph.

Tell us about your humble beginnings in learning French. What ignited your interest in this language?

I took up learning French in school in the 6th standard. It was tough for me at first but eventually, I managed to complete and pass my school exams!

However, I think the game-changer was once I joined Alliance Française in Chandigarh. That was when my learning went to an entirely new level as there was so much focus on the spoken and conversational parts. I remember renting French movies from the library and participating in French plays.

I think by the time I arrived in college; it was clear that I wanted to pursue this further as I had opted for French Honors.

Tell us a little about your latest feat. What led you to the same?

I have just been conferred with the Chevalier de l’Ordre national du Mérite by the President of France, which is one of France’s highest civil distinctions. I am extremely humbled and honored to receive this award which has been given to me in recognition of my contribution to developing Indo-French economic and bilateral ties. I’m currently serving as the Director General of the Indo-French Chamber of Commerce and Industry, which is one of India’s leading bilateral chambers of commerce.

What are some upcoming initiatives on your radar?

On the professional front, we have a lot of plans to develop IFCCI further. We will be focusing on increasing our membership, and becoming more active in France, and we are also expanding the team and our geographical presence. We also plan to engage more in advocacy with the Government of India.

One final message for our readers.

It may sound like a cliché, but I would always encourage everyone to think big and follow their dreams. You never know where life will take you!

Published in Cover Story and Uncategorized