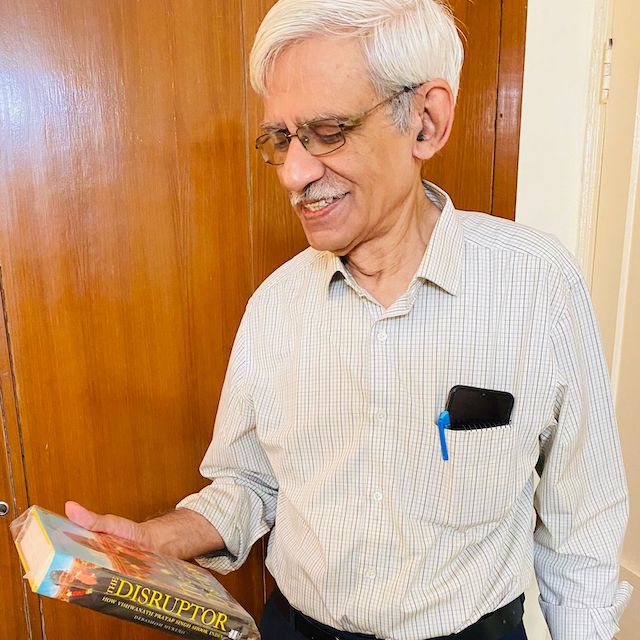 Six years of painstaking efforts – holding conversations with hundreds of people, pouring over documents, scanning a huge tome of archaic interviews of the former Prime Minister VP Singh lying buried in the Nehru Memorial Library, research, writing, editing, re-writing, in fact, a tapasya is what went into the making of The Disruptor, a somewhat critical look at the complex political personality that he was.

A veteran journalist who spent a lifetime with the most respected media brands in the country, Debashish Mukherji, was genially described by a few of his then colleagues as “The Boss, who works”, often doing the work of his subordinates himself. Courteous to the core, the very hard-working Debashish always came across as a scholar recording the slices of history as they were happening – and the Grammar Nazi in him did the rest.

The outcome is an interesting take on the recent political history of the country, one that students of politics and political science would do well to read to see how Debashish decodes the complex personality that VP Singh was. At the end of 440 pages of text, 75 pages of notes and 13 pages of Index and the six years it took for “The Disruptor” to hit the bookstores, Debashish, the journalist, the author and the storyteller is relieved. Happy that he was able to scale the mountain, he has an advice to the budding writers — never think of the seemingly daunting task (book) at hand, just concentrate on the next chapter, the next paragraph, the next sentence and the next word ……in the end, everything would work out.

Excerpts from an interview with Debashish Mukherjee. Author “The Disruptor”, published by Harper Collins Publishers India.

Tricity Scoop: How long did it take for you to do this biographical sketch of VP Singh – from ideation to publishing and release?

Debashish: I worked in fits and starts, also because I guess I’m a bit lazy, and I also had to earn a living alongside. It took me three years to research and another two to write. Thereafter getting published took a little over a year, because of the backlog caused by Covid-19 at my publisher’s end. Ideation was very sudden, following a meeting with an old acquaintance who had worked closely with V. P. Singh.

Tricity Scoop: What inspired you to do this, or why this book?

Debashish: I had always been fascinated by V. P. Singh’s career trajectory, and how dramatic it was, especially during the 1980s. But the catalysts were two – first, the meeting with the acquaintance I referred to. His name was Shekhar Singh – he hailed from Allahabad (Prayagraj) to which V. P. Singh also belonged – and he was a student at JNU in the late 1980s. He was a member of JNU’s NSUI unit (the Congress student body), but he was so impressed by a speech V. P. Singh made a visit to the campus in 1987-88 that he quit and joined V. P. Singh. In fact, he maintained, almost the entire JNU unit of NSUI quit the Congress and began working for V. P. Singh – so inspired were they by V. P. Singh’s crusade against Congress’s corruption.

It occurred to me that the political stream V. P. Singh represented in the latter part of his career – after leaving the Congress – that of a secular, democratic, non-casteist opposition to the Congress, had completely disappeared. I felt we needed to record its historical significance. And Shekhar Singh was still in touch with V. P. Singh’s family introduced me to them.

The second catalyst was getting hold of the 900-page transcript (that too in Hindi) of an interview with V. P. Singh was conducted by Nehru Memorial Library and buried in its Oral History section. It was conducted in his last years and covered his entire life. V. P. Singh’s family told me about it, and in fact gave me a duplicate copy for my use. It was not only unpublished but looked untouched by hand (both the copy in the library and the one with the family – I doubt anyone had read through it fully before me). Without that, I would not have had V. P. Singh’s own voice and the project would not have been worth pursuing.

Tricity Scoop: How do you see “The Disruptor” — his role in Indian politics, and did he change it forever, and if so, for better or for worse?

Debashish: V. P. Singh did change Indian politics forever, both by his campaign against Rajiv Gandhi’s government, which led to the Congress defeat in the 1989 Lok Sabha elections and by implementing the Mandal Commission Report giving 27 per cent reservation to OBCs in central government services. The Congress had given its best-ever performance in the 1984 Lok Sabha, winning 404 of the 543 seats, and no one imagined then that this would be the last time it would have a proper majority in Parliament. But that is how it turned out – P. V. Narasimha Rao’s government remained shaky all through its term, while Manmohan Singh’s government was a UPA coalition. The Mandal Report implementation accelerated the political consolidation of OBCs in North India, making them a much more potent force than before, once again changing Indian politics irrevocably.

Was it for the better or the worse? Well, though it was the last thing V. P. Singh intended, the weakening of Congress has led to the rise of the BJP, making the BJP the dominant political party in the country.

Tricity Scoop: What are the lessons for current day politicians from the life and times of V. P. Singh?

Debashish: I would say V. P. Singh’s career is a cautionary tale for politicians against making hasty alliances. If he, after leaving the Congress, had not brought all the broadly centrist opposition parties together to form the Janata Dal as hurriedly as he did, if he had taken his time over it and built a more solid foundation with only some of these parties or by gradually building up his own Jan Morcha, it would have taken V. P. Singh longer to come to power, but his government would have had a more solid foundation. If he had not allied with the BJP, it would never have got the turbo boost his alliance gave it, raising Its Lok Sabha seat tally from 2 in 1984 to 85 in 1989, after which it became unstoppable.

Tricity Scoop: If you were to reassess his tenure now, and the rise of Mandal and Mandir politics in the present-day context, how would you paint his persona and politics?

Debashish: I think the Mandir issue would have risen anyway. It was so full of potential as a vote catcher that the BJP would certainly have brought it up at some stage. No doubt, if V. P. Singh had not brought in Mandal, the BJP may have delayed playing it up, but would never have abandoned it.

Making Mandal an issue was definitely V. P. Singh’s contribution – the report had been practically buried since it was submitted 10 years earlier. V. P. Singh’s persona was a bundle of contradictions – especially his ambivalence about seeking power. Politics is all about acquiring state power, which can then be used for good or misused, but V. P. Singh often seemed unsure about whether he wanted positions of power or not.

Tricity Scoop: What is the state of reporting on politics and political issues today in your view?

Debashish: Well, many people have bemoaned the partisanship of today’s media, fake news, the use of news programmes/debates on TV as arenas for theater rather than informing the viewers, and so on. I agree with them. The press was certainly badly divided even in V. P. Singh’s time, but not as badly as it is now.

Debashish: I feel very relieved of course, not thinking yet of future projects. While writing the book I often worried I might never complete it, and the entire effort might go to waste. It was really like scaling a mountain. The trick is to not look up at the peak (the completion of the book) because it seems so far away and can be very discouraging. Instead, one should just focus on the next step – the next sentence, the next paragraph, the next chapter.