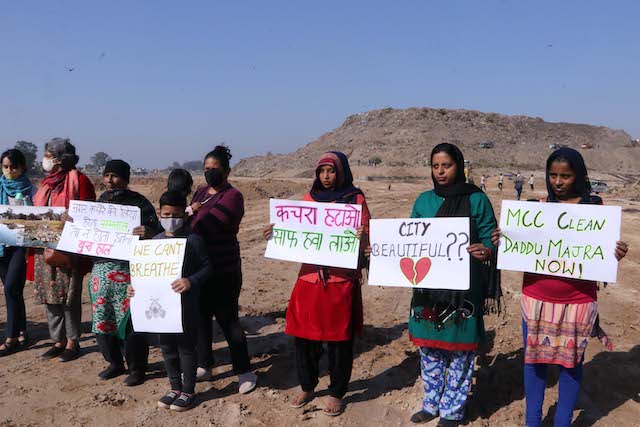 Up in arms, a group of concerned mothers led a peaceful public demonstration on Friday at the Dadu Majra dumpsite, criticising the Chandigarh Municipal Corporation’s lackadaisical approach in failing to clean up the open dumpsite.

The mothers, who had gathered from different parts of the city including the Dadu Majra colony, claimed that despite many assurances, the situation at the dumpsite had only gotten worse. They reasoned that they had no choice but to gather peacefully as they are concerned about their children’s future and want to have their voices heard, particularly with the upcoming municipal elections.

“We had earlier visited the residents of Dadu Majra and found that close to 50,000 residents were living in inhumane conditions, the stench was unbearable and the number of diseases including skin allergies, asthma and others had increased. The dumpsite was also a major source of air pollution. Promises made to clean up the dumpsite were not fulfilled,” said Samita Kaur member, Warrior Moms from Chandigarh who has taken up the issue.

She went on to suggest that it was a pity that, while on one hand Chandigarh prides itself on being a planned and clean city, its residents were suffering the consequences of the open-air dumping site. “It came as a shock to several mothers as they realized that while they were dutifully segregating and recycling their waste, the civic body was dumping waste without any separation at the Dadu Majra landfill. This has become a cause of health and environmental worry for not only residents here but also across the city,” said Samita.

The Warrior Moms, seeing the plight of the residents and increasing pollution and its health impacts, wrote to the Municipal Commissioner, requesting action, and a group of citizens, including the mothers, went to meet her, where she assured them that action will be taken to clean the dumpsite.

Dadu Majra landfill happens to be the only notified dumping yard in the city and is located on approximately 45 acres of land in Sector 38.