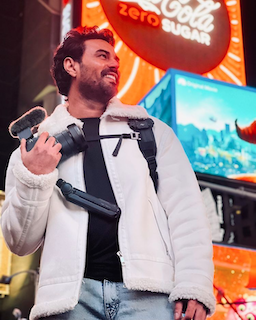 You Can Never take out Punjab out of a Punjabi!

With a passion for dancing, Rohan Virdi had started his career in Bollywood as a dance performer and an assistant choreographer and later did a couple of projects as a choreographer. He eventually worked with all the big names in Bollywood like Farah Khan, Bosco Caesar, Saroj Khan, Ahmed Khan, and Remo D’Souza. He also worked with eminent actors like Amitabh Bachchan, Shahrukh Khan, Salman Khan, Hrithik Roshan, Varun Dhawan, Sidharth Malhotra, and the list goes on and on.

He was leading a flourishing life in the Bollywood industry, but as times unfolded, he discovered that destiny had some other plans for him in store.

One fine day, his destiny took an unforeseen turn when he met with an accident while shooting for Aurangzeb, after which he shifted to the US and ever since then, there has been no turning back!

In an exclusive interview with Rohan, we understand the challenges that he faced and the struggles that he went through before becoming a successful vlogger in America. Here are some excerpts from the interview.

Since you hail from a Punjabi background, tell us a little bit about yourself, your family and your Punjab connection.

My dad used to live in Punjab for over 25 years and then he moved to Kolkata, and he met my mom there. I did my studies there.

I have an elder brother and a younger sister. My brother was interested in acting and I was interested in dancing. My brother moved to Mumbai to get into the film industry with my uncle and I also moved along with him as he was alone. My dad shifted to the USA and was working in California in a gurudwara and after a couple of years, shifted back to India.

You were a successful choreographer in Mumbai. What led you to leave India?

In India you are noticed only when you get work, otherwise nobody is going to ask you.

I joined Farah Khan as a dancer and then I worked with her for 6 years. Later, I worked as an assistant choreographer and also worked as a choreographer. Then I met with an accident when I was shooting on a bike for the song of the movie Aurangzeb with Arjun Kapoor and suffered injuries. I was depressed for 6 months.

After that, I got an opportunity in the US in 2013 and shifted to America. Reshma is an old friend of mine and was coming to the US. She asked me to come along, and I came for two months. I liked the place very much and even the people, so after 2 months, I ended up spending a year, and the time just flew by. I used to visit India off and on. I am working as a choreographer in the US, and have done big shows, like IIFA Rocks in Orlando, Florida.

What was your inspiration behind becoming a Vlogger?

I used to make videos and send them to my mother but since I have a background from Bollywood, I was very interested in handling cameras etc. My friend Mohsin told me to start vlogging since I used to make good videos, and then I started shooting videos of my friends.

My friend Reshma was also there, and she also encouraged me to make videos because everyone knows about my keen interest in such things.

When I was in Mumbai also, I used to take a lot of interest in cameras and how the shooting was being done. I used to shoot songs for my friends Jigisha, Pallavi, Reshma and learnt editing from YouTube much before the pandemic came. My friends suggested that I should start vlogging as I used to send videos back home.

From there, I started vlogging. A vlogger, Ajay bhai of This Indian, supported me a lot. I had made a lot of videos but did not know what to do about them and used to post my videos in the comments of various YouTubers. Ajay took note of it and made a Vlog on my videos The Next Big YouTuber in America and I got so happy that I got his number and contacted him and got a lot of guidance from him. I eventually met Rajan Chacha and Sunty of Sunty Dreams also and they guided me on what topics Vlogs should be made on and then my Vlogs started getting viral. I used to live with my friends in Maryland and due to the pandemic, my work was affected but I continued making vlogs. I also worked on my Instagram.

You are one of the top Indian vloggers abroad. How do you make your Vlogs interesting?

I always make it a point that my vlogs are entertaining. I myself see vlogs by other vloggers, and it made me realize that when people see Vlogs while having their breakfast, they want to smile, laugh and they want to get educated.

I get many messages from youngsters saying that they are in India and their dream is to see America; through my vlogs, they get to see life in America. This motivates me a lot that boys and girls who will come to America later will have all the information about America. They will know about life in New York, the kind of houses in New Jersey, the time when it snows and how cars move around in snowfall, what kind of clothes you should wear, the malls in America, how the Americans speak to you etc. I show all of this in my vlogs and add cinematic effects to them.

I know a lot of people will come to America after seeing me, while a lot will appreciate the drone shots. They get to see how I live with my friends here etc. All these things need to be taken care of by any vlogger to make it entertaining.

Vlogs cannot be made while sitting in one place. The snowfall has just started, and I ventured out in the snow with my camera. A lot of hard work goes into it. I can show the snowfall sitting in my window but no, I have to go out in the knee-deep snow and show it to my viewers and give them the real feel of snowfall. I will fly the drone in snowfall even if it breaks but I will do whatever it takes to make my vlogs engaging. I spend more than what I get from YouTube but there is a sense of satisfaction at the end of the day.

What according to you is the future of Vlogging, now when there are so many Vloggers? Would you continue vlogging?

The future of vlogging – every person wants to be a vlogger when you see YouTube and everyone wants to earn money but passionate vloggers are very less. Those who work hard will never stop vlogging but those who are here only for money might opt out when their vlogs are not so popular. However, those who are passionate will succeed and continue with vlogging. I will continue vlogging because this is my passion!

What is the best and worst part about being there?

The best part for a middle-class family guy is that you can support your family in India, and you enjoy being here because this country is beautiful and you get to experience everything here. You get to see snowfall here, fall season and even summers. The people here are also good. The worst part is that you will miss your family a lot. I miss my father, mother, sister, brother and other relatives a lot.

One thing that you miss the most about India besides your family.

India has its own character as people are always there for you. Wherever you go across the world you will never get that feeling. Things are cheaper in India but if you are earning in America and spending in India then it’s cheaper in the US.

There is a lot of vlogging in India also. What is the difference between vlogging in the US and India? In India, vlogging is very difficult and there is a lot of hard work involved. India is a beautiful country and Indian vloggers have to travel a lot for content. They are travelling to places like Darjeeling, Nepal, Ladakh, Manali, Kerala etc. I feel vlogging abroad is a window for those Indians who are keen to work abroad and are curious to see other countries and know more about them.

When are you next coming to India?

I want to go to India but can’t say when because of the pandemic. I am scared that if I go to India, I might face problems coming back, so I can’t take the risk at the moment.

You can visit Rohan Virdi’s YouTube Channel at https://www.youtube.com/c/RohanVirdi