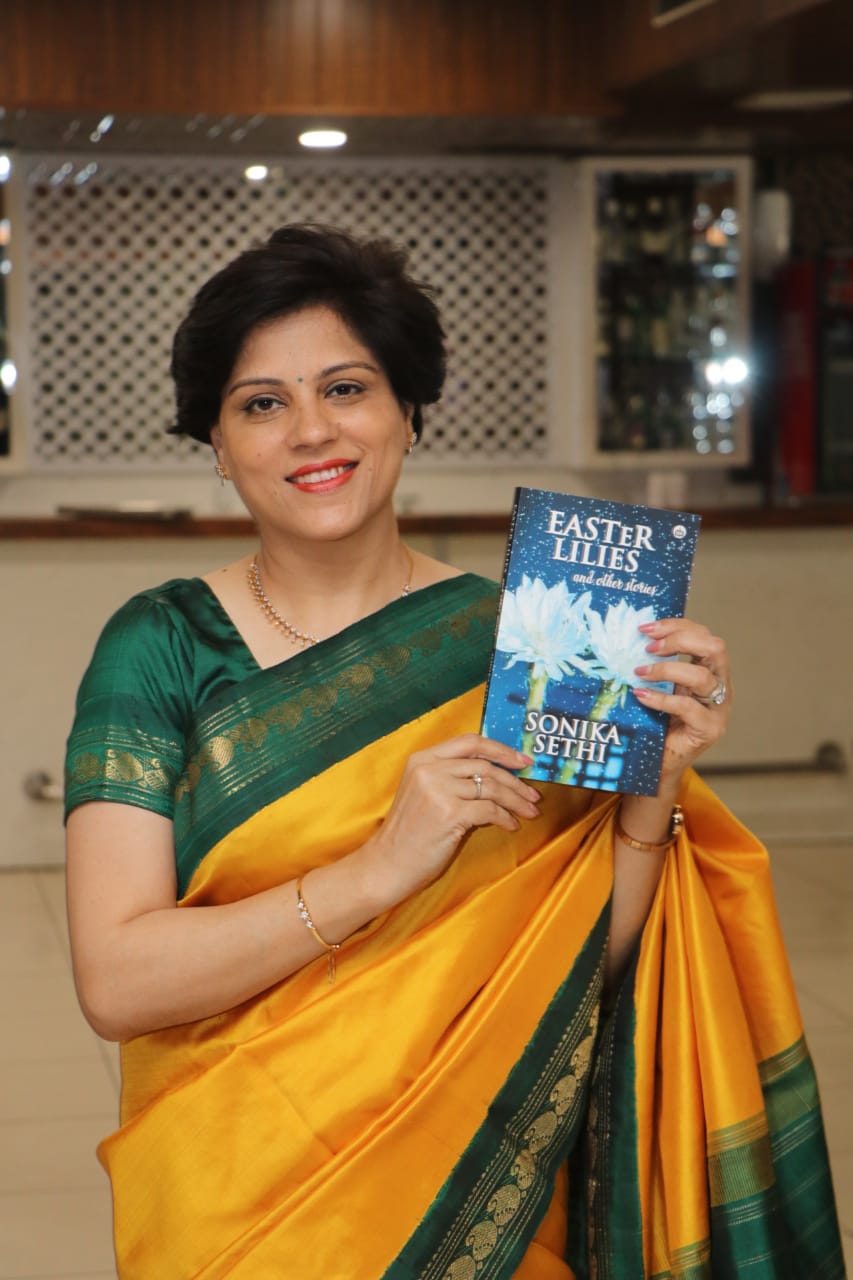 Her latest book, ‘Easter Lilies and other stories’ is a collection of ten stories by Sonika Sethi. The title itself is symbolic and refers to purity, hope, rebirth and resurrection. The backdrops range from Nazi Germany to late twentieth-century Ireland to the battlegrounds of Mahabharata depicting the internal and external strife faced by ordinary mortals as well as the All-knowing. The eponymous story ‘Easter Lilies’ sets the ball rolling by telling the story of a middle-aged woman taking care of a house and the lilies that surround it while waiting for the ‘man of the house’ to return. Her hope and her faith sustained her in her endless wait.

Speaking on the occasion Mr Vinayak appreciated the versatility of the author and the fact that she is a keen observer of quaint things around her. Delving into the contagiousness of curiosity, he also urged the audience to embrace new avenues of observation and creativity.

Rajbir Deswal who has also written the foreword to the book talked about the journey of the author and her writing style. He also mentioned how the taunting suspense of her short stories gnawed at him. Furthermore, he described the experience of writing middles for newspapers which he had in common with the author.

Vivek Atray also applauded the writing skills of the author and said that it is really applaudable that more and more authors are coming up with short stories, micro and flash fiction, the latter being a daunting task that requires careful precision and brutal editing of literary expression. He also motivated the audience to be encouraging people who spread positivity through writing.

The writer explores multiple genres, themes, narrative techniques and points of view through her writing style. ‘The Lone Warrior’ narrates the points of view of characters from Mahabharata including Krishna, Karan, Duryodhana and others on the thirteenth day of the battle. The writer conveys her belief in humanity through a sensitive portrayal of the characters. According to her, “No human being or character should be categorized under dichotomies of black or white; good or evil; hero or villain. I, through my writings, try to explore the grey areas of the human mind which lie somewhere between black and white.”

‘Easter Lilies and other stories’ is the second collection by the author. Her previous collection ‘Of Gulmohars and Kaners and other stories’ included twenty stories ranging from long, mid-length and very short stories also called ‘micro-fiction’. The stories paint on a canvas, the geographical boundaries that extend from the Indian subcontinent to Europe to Greece and to Turkey. These pan-global settings subtly convey the idea that while human emotions cannot be fathomed and scanned even by the most powerful equipment, it’s only the creative writer who can get under the skin of the characters and lay bare what goes on in a single human heart.

Talking about her inspiration, Sonika reveals that most of her plots and characters are inspired by the people and incidents around her but sometimes they are a manifestation of her fictive juices. She loves to read historical fiction and literature from around the world. Her current literary interests include Turkish-American author Elif Shafak, Australian Kate Morton, Nigerian Chimamanda Nguzi Adichie and Lithuanian-American Ruta Sepetys.

About the Author: Dr Sonika Sethi is presently an Associate Professor at Sanatan Dharma College, Ambala Cantt, where she teaches literature and linguistics to Honours and Post-Graduate Students. Her articles and middles are regularly published in Hindustan Times and The Tribune. This is Sethi’s fourth book. The previous books include two academic books and a collection of short stories.