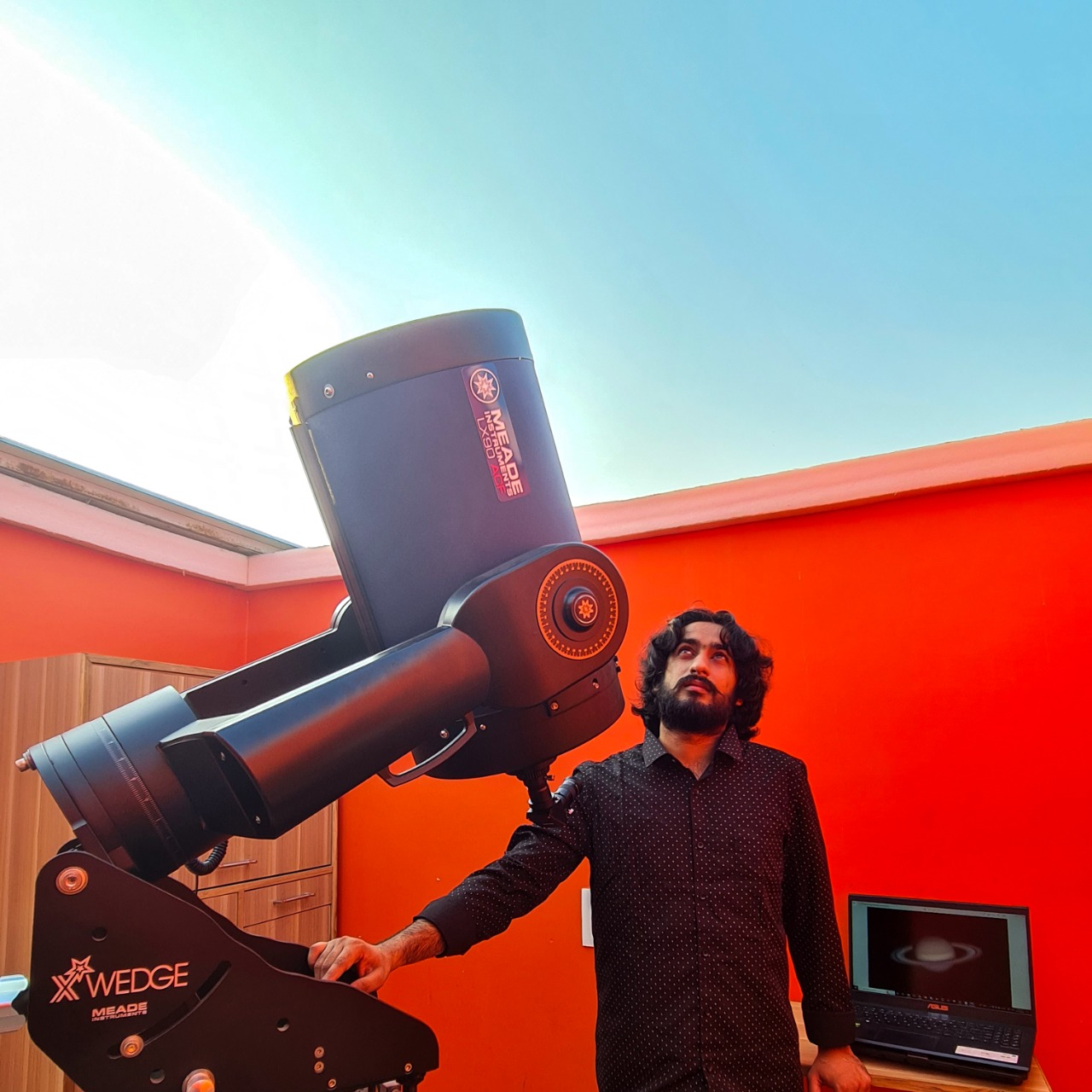 City-based Astro photographer Amrinderjit Singh has carved a niche for himself in this arena by clicking some really out-of-the-box astro photographs. His latest photograph showing the highest peak of the moon with its shadow on the lunar surface is seen to be garnering a lot of love and appreciation amongst the astro photography enthusiasts.

In an exclusive interaction with him, we explore more about his journey as an Astro photographer and get an insider’s view into some of his masterpieces!

Amrinderjit spent his childhood in a very calm and nature bound town – Shahpurkandi, near Pathankot.

During his summer break from school, his father used to wake him up early for a morning walk, where he used to hear the serene sounds of chirping birds, river Ravi flowing and the morning prayers, which were further complemented with the fresh breeze.

“While walking, we used to see a lot of stars in the dawn sky, which gave a very soothing experience to the eyes. I was lucky to enjoy nature in all senses in my early childhood,” Amrinderjit shared.

He further added, “At the age of 5, when we used to sleep outside on the roof under a blanket of starry nights, I used to notice many stars and constellations. While observing, I once found a star going past at lightning speed and I was wondering why other stars are not moving – that image is still printed in my mind! This innocence was the driving force for my love of astronomy.”

“I have been a true stargazer since childhood. I was fascinated when I saw the Moon for the first time through the smaller telescope and I always desired to capture images as close as NASA’s images,” smiled Amrinderjit.

He further elaborated, “On 6th August 2022, the sky was clear after the rain and I pointed my telescope quickly towards the sky, where I saw the Lunar mountains in my eyepiece. I captured many frames out of which I got 60 to 70 good frames. During the processing, I saw the shadows of the mountains which added more flavor to the photograph, and it became the best photograph in my collection!”

His Partial Solar eclipse photograph collection with his student Manandeep Singh is another photography marvel in his kitty.

Amrinderjit also runs the LeOrion Observatory where he has high-resolution telescopes and the scientific equipment required for astrophotography. In the past, he also captured the greatest conjunction of Jupiter and Saturn on 21 December 2020, comet Neowise, and past Lunar and Solar Eclipses.

The name LeOrion is derived from the two major constellations Leo and Orion. Amrinderjit’s observatory has five major telescopes – two Newtonian, two Dobsonian, one Schmidt–Cassegrain and a couple of cameras which are different for planetary, lunar, and deep sky.

“We have Meade LX-90 12 inches telescope (30cm primary mirror), which is our biggest telescope and it is used for observational astronomy, spectroscopy, and deep sky imaging. I am also doing my collaborative astrophotography project with Craig Stocks, one of the world’s leading astrophotographers from Utah, USA. I do spectrum analysis of stars which helps me know about stars and the elements present there. Paul Temple, who has an asteroid 50687, on his name, appreciated my spectroscopy work on WR star and he said, ‘Doing this kind of spectroscopy is a lot of fun and very educational. Sounds like you are on the right track. My first images were not even close to as good as what you are already doing’,” shared Amrinderjit.

Seeking Solace in the Lap of Nature

While shedding light on his other passions, Amrinderjit shared, “Being close to nature, I usually spend my time listening to and learning classical music, which indeed adds one more stem to my life tree. In my leisure time, I learn flute from my Guruma Debopriya Chaterjee Ranadive, who is one of the leading flutists in the world and a senior disciple of legendary flute player Pt. Hariprasad Chaurasia. I learn tabla from Gurpreet Singh, who is an upcoming gem in Indian Classical Music.”

To sum up, Amrinderjit affirmed, “Astro photography can be a good hobby, but it requires a lot of patience. As we deal with the sky, we must accept that the city sky throws many challenges while capturing photographs. However, you can capture the perfect frame if you are there at the right moment. NASA has always been to the best level in terms of technology, and I desire to capture images as close as NASA’s.”