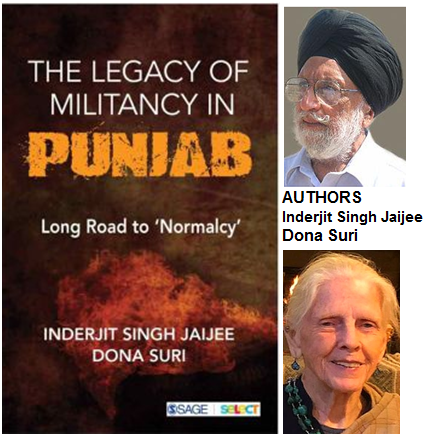 Legacy of Militancy in Punjab: The Long Road to ‘Normalcy’

Inderjit Singh Jaijee and Dona Suri’s latest book Legacy of Militancy in Punjab: The Long Road to ‘Normalcy’ by Sage Publishing, New Delhi (2020) is seen to be the latest buzz in town!

This book is a ‘broad-brush’ multi-faceted approach to understand what happened in Punjab after a decade of violence and lawlessness.

Militancy convulsed Punjab from roughly 1984 to1994. Afterwards, politicians, government spokespersons and assorted intellectuals declared that ‘Khalistan’ was gone, and the state was ‘returning to normalcy’ as though the state would suddenly find itself in some pleasant place of a bygone era. In truth, the clock can never be turned back; one can never step in the same river twice.

The authors recount the no-holds-barred struggle to suppress militancy and its ‘side-effect’, namely, abuse of power.

By the mid’90s gunfire ceased but distortions that arose in those years of turmoil did not go away. Reduced accountability warped administrative and executive ‘culture’ and threat-perception coloured the attitude of the judiciary for years. Victimisation at the hands of both police and insurgents created risk-averse citizens who prioritised personal safety above all, while policies pertaining to state debt and industry impacted economic development.

Over the past 30 years, ‘Return of Khalistan’ stories have appeared regularly in the media, with people as believable as the Army Chief of Staff warning that India must be ready for more Khalistan trouble. Some have even tried to brand the ongoing farmers’ agitation with the “Khalistani” label. Since the ‘90s, in election after election, pro-Khalistan political leader Simranjit Singh Mann has failed to win a single seat – or even safeguard his deposit. This makes it clear that voters in Punjab have no interest in Khalistan. The recurrent Khalistan stories are clearly scaremongering and carry little credibility. But then why do such stories continue to be circulated?

In six chapters, the authors dig out minute details of how the state’s economy, politics, culture, and psychology have been impacted by Operation Blue Star and its selective historicisation. The book details how militancy affected the credibility of the judiciary, why trials dragged on for 25 years, how militancy influenced popular culture and how the youth are responding in today’s Punjab.

In all, not only is the book packed with information, it’s a good read too!

Inderjit Singh Jaijee is well known in Punjab for his work to ensure education for rural children as well as for his advocacy of civil rights and human rights. Dona Suri has been a newspaper editor for 35 years and has worked in India Today, The Tribune, Indian Express and The Hindustan Times.