From Tricity to UK: A Tale of Compassion

Kamal Preet Kaur, a senior journalist from Chandigarh is today making news in the UK. However, this time, it is not because of her acumen in the media industry but, as a journalist-turned-politician who strives to bring about a change in the society and her recent endeavor to act as a catalyst of change in the UK stands testament to the same.

She has recently been selected by the Labour Party members to represent the Wood End ward in Hayes, Hillingdon, during the forthcoming local elections on May 5, which will anticipatedly set a new trend to indicate the political trend for national elections.

In an exclusive interview with Tricity Scoop, she talks about her journey from Tricity to making it big in the UK.

Walk us through your journey from the alleys of Tricity to making it big in the UK?

I came to the UK after taking a career break from The Indian Express, Chandigarh, to study further. I had planned to return home after my study. However, life had other plans. I went on to study more. Also, I met Sukhwinder Singh (my husband), fell in love, got married and stayed on. Sukhwinder has had a huge involvement in the Sikh and Punjabi community circles through his work with gurdwaras, events, media and community initiatives in the UK. Therefore, it was only natural for me to jump into the thick of things.

Being a journalist, I couldn’t keep myself away from the concerns of the community at large, and the Punjabi diaspora in particular. I have always had a special interest in Indian politics and geo-political matters. I joined the Labour Party about 16 years ago as its ethos were in sync with my personal ideals.

I have campaigned with and for the Party’s Punjabi/Sikh MPs in the country, other BAME MPs, as well as my local MP and councillors in Hillingdon, the constituency where I am actively involved through my branch. Now, the time seemed ripe to take a plunge into politics as a representative and make a real difference in the lives of all my ward residents.

What were some key challenges that you had to face as a woman leader? How did you overcome the same?

I think women still have to work twice as hard at everything they wish to achieve in this world which is still a long way away from gender neutrality. Patriarchy, misogyny, mansplaining and covert racism are a few things that I face often. However, we have worked very hard for the community and my work speaks for itself. I have learnt to take such challenges in my stride. The confidence in myself and faith in the Divine Plan is a gift from my parents who never said no to anything I wanted to try in my life. The husband has helped push boundaries and the entire family takes pride in my achievements. This keeps me going and gives me the strength to take every challenge head-on.

Tell us more about your role in the upcoming nationwide local elections in England?

I have recently been selected by the Labour Party members to represent Wood End ward in Hayes, Hillingdon, during the forthcoming local elections on May 5. These elections set the trend for the national elections. My current role is to campaign for the Labour Party candidates and make every possible effort to push the Conservatives out of power in the Hillingdon council. Canvassing, fundraising, meeting people, talking about the Party policies for the local residents are some of the other responsibilities that I share with my fellow candidates. 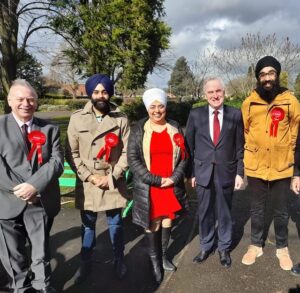 What is your vision and mission as a politician in England? How do you plan to achieve the same?

My vision and mission as a politician are ‘Sarbat da Bhala’ (welfare for all). I want to be the voice of the marginalised, diverse communities that call the UK home. I am extremely passionate about social and climate justice, inter-faith work and community cohesion. As an Early Years Educator, I see childhood poverty and how it affects children’s development; as a mother of two teen boys, I am worried about street safety concerns, rise in knife crime and drugs. I want to leave a compassionate, humane, and green world for the coming generations. Being a public representative not only gives you more responsibility, but it also gives you some sort of material power to make a real difference in the lives of the people. If elected, I will use the power vested in me for the welfare of the residents without any bias or prejudice.

My biggest inspiration comes from the ‘Miri-Piri’ principle of my Sikh faith, where I see politics and spirituality coming together for the greater good of the world. My mother who dreams my dreams, my husband who is the wind beneath my wings and my children, for whom I want to see a compassionate world, are my everyday inspirations.

One thing that you miss the most about Tricity?

Tricity has a special place in my heart. My happiest times and my saddest times are rooted there. The carefree years spent with my friends and extremely delicious food shared with them at Sindhi Sweets, Gopal’s, Stu-C and Hot Millions is what I miss the most. Riding on my Yamaha through the colourful by-lanes of the City Beautiful during Spring is simply unforgettable.

One final message for our readers.