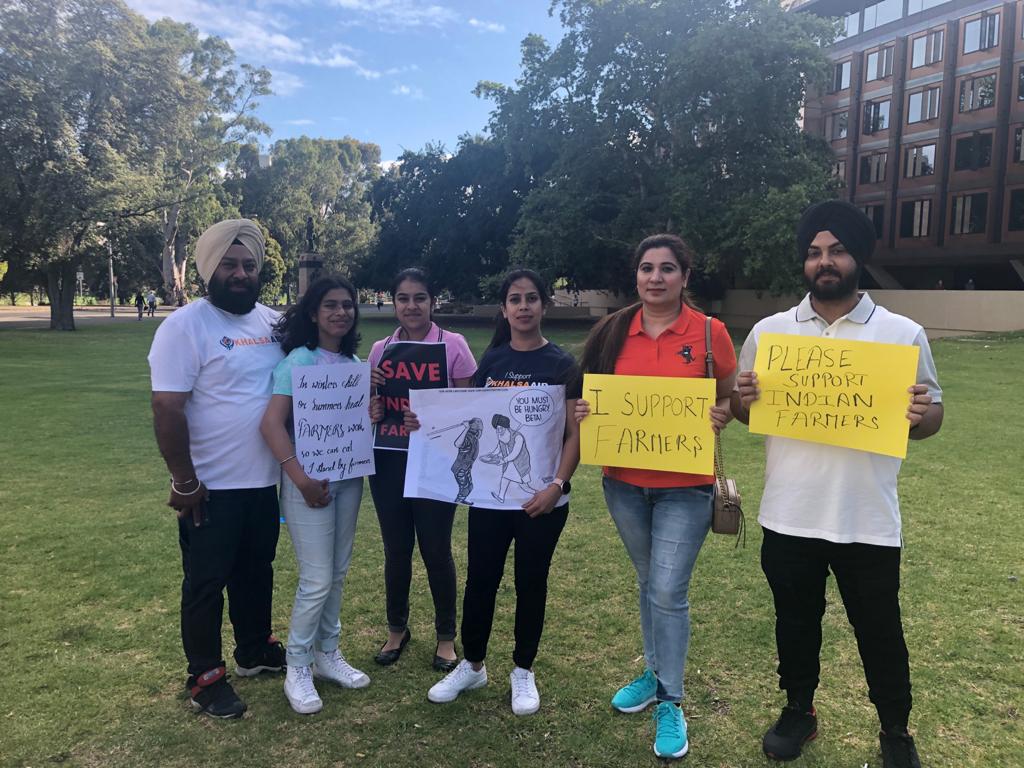 While India commemorates Kisan Diwas on 23rd December, the farmers of the country continue to share their plight in what is seen to be one of the biggest protests in world history. Farmers and their supporters from all walks of life are joining hands to fill in this remarkable picture of thought-provoking dissent, which is not only limited to India but is also seen across the globe.

The farmers were seen to be at odds with the recent farm laws since a few months now. However, the protest gained momentum when farmers – notably from different states of the country began the ‘Dilli Chalo’ movement and ever since then, there has been no turning back. They’ve pledged to return back to their homes only after they receive a befitting response from the government. These farmers and their supporters have braved the storm of water canons, tear gas shells, and bone-chilling winters, but their unflinching perseverance continues to be unaltered.

In a candid conversation with Inder Bajwa (Model and Social Activist) and Moose Jattana (Social Media Influencer and Social Activist who travelled all the way from Australia to Delhi solely for joining this ‘patriotic movement’), we explore their take on the entire scenario.

The ongoing protests against the recent farm reforms are paving the way for a first-of-its-kind agricultural revolution. What’s your take on the same?

Inder Bajwa: The ongoing protests although on the surface may seem like just a farmer’s concern but, they affect everybody. Every citizen that goes to buy grain and vegetables will see the effects of these laws for years to come and it might be too late then to realise. So, the information being put out about the truth of these laws is crucial and needs to be spread far and wide in and outside of India.

Moose Jattana: I would say it’s more than just an agricultural revolution. It is really an intellectual revolution, where we are breaking out of our ignorance as well. A lot of people follow the government and their governance as if it’s written by a God and it must be correct. With this protest, we see an awakening – people are realising that maybe the ruling party isn’t working in the favour of the people and I am glad that we’re finally seeing that shift in mindset.

What in your opinion would be a feasible solution to the farm reforms?

Inder Bajwa: Being not only from a farming background but also being someone that buys food on a larger scale to donate or to use in events and sewa, I will be directly affected by these laws and I firmly believe that a repeal of all three bills is necessary. A spotlight needs to be put on agriculture in our country and it must be prioritised. We need to make what we already have better, instead of trying to fix something that’s not broken.

Moose Jattana: Agreed. I am learning more and more every day from Inder and the leaders at the protest as well as the aam aadmi, the common man and woman, strangers and friends about the bills and what they want to happen. A repeal of all black laws is in the majority vote and I will continue to stand behind those that work in this field.

One message for all our readers.

Inder Bajwa: I know it’s very fearful to stand against the State, but I request you all to come forward and be the voice for those who had been there for us. I only regret the things I had not done in my life, but I cannot afford to regret this one.

Moose Jattana: Make sure when, in 20 years, your kids or grandkids ask about 2020 – you can proudly say you were on the right side of history and did your best to ensure that the people had your full undivided support and attention. After all, at the end of the day, you are also a part of ‘the people’ and will need the voice and support of others around you.

From Across the Globe

Showing solidarity and support for Indian farmers protesting against the agricultural reforms enacted by the Indian government the non-resident Indians organized a protest outside the Adelaide Oval on day one of India-Australia day and night test match.

Indian-Australians protested against the farm laws and demanded that the government should roll back the bill. Criticizing the Indian government, the protestors said the bill passed by the government is aimed at providing benefit to the corporates.

One of the protestors outside the Adelaide Oval, Tarnbir Singh, said “The support for farmers is growing day by day. Everyone is trying to contribute in their own way. So many NGOs have come forward to help the protesting farmers on the ground by offering them food, clothes, blankets, and other stuff. It is not a protest but a movement against the dictatorship of the Indian government.”

Adding to this another protestor Parminderjit Singh said, “Today’s protest was not a one-off thing. We will continue to protest till our Indian farmers get justice. We will not the corporate rule the farmers.”

They also handed out leaflets to the people coming to watch the match to create awareness about the issue. The leaflet explained what the bill was and how Indian farmers were not taken into confidence before enacting the bill.

Among the protestors were people from Punjab and Haryana, most of them hailing from farming families in India. They were joined by women and children also who protested holding placards and pamphlets.

Across Australia series of protests were organized by the Indian community to show their concern and support for farmers in the last few weeks. Protests were held in Adelaide, Sydney, Melbourne, and Canberra. A protest was also organized outside the South Australia Parliament and other parts of the city a couple of weeks ago. Social media was also used to muster support for farmers.

Somebody has very rightly said that ‘A Punjabi can come out of Punjab, but Punjab never comes out of him (a Punjabi)’. This statement about ‘Punjabis’ is being substantiated in Winnipeg of late when a number of Punjabis, including international students, can be seen braving bone-chilling weather on roads and traffic signals every now and then, extending their support to ongoing farmers’ protests in their home country, India.

Evidently, the Winnipeg’s chilly weather, which has been fluctuating between -5 and -25 nowadays, has failed to dampen the spirits of local Punjabis, who recently have attracted all attentions in this second coldest city of the world by organizing about 35 kms long car rally in support of their brethren (farmers). The convoy, consisting of more than 1000 cars, remained on the city’s main roads for over five hours.

“In the time of need, we want to tell our farmer brothers that they are not alone in their fight. We are with them though we are staying hundreds of miles away from them”, said Manjinder Singh Bhangu, a native of Winnipeg. Manjinder Singh originally hails from Barnala, Punjab and has shifted here a couple of years ago.

For several ‘Punjabi’ youngsters, it has become a kind of routine to stand on traffic signals, with placards, having messages of support to farmers.

Aman Preet Kaur, who along with her friends usually brave the odd weather for the cause, said that they too belong to families of agriculturists. “How can we sit peacefully in our cozy homes when our families are protesting out on roads in India. We are doing very little in support of them”, said Aman Kaur and her friends.

“What little we can do, is being done. We are showing our support through banners on our cars, by displaying placards and other such measures,” said the youngsters in unison.