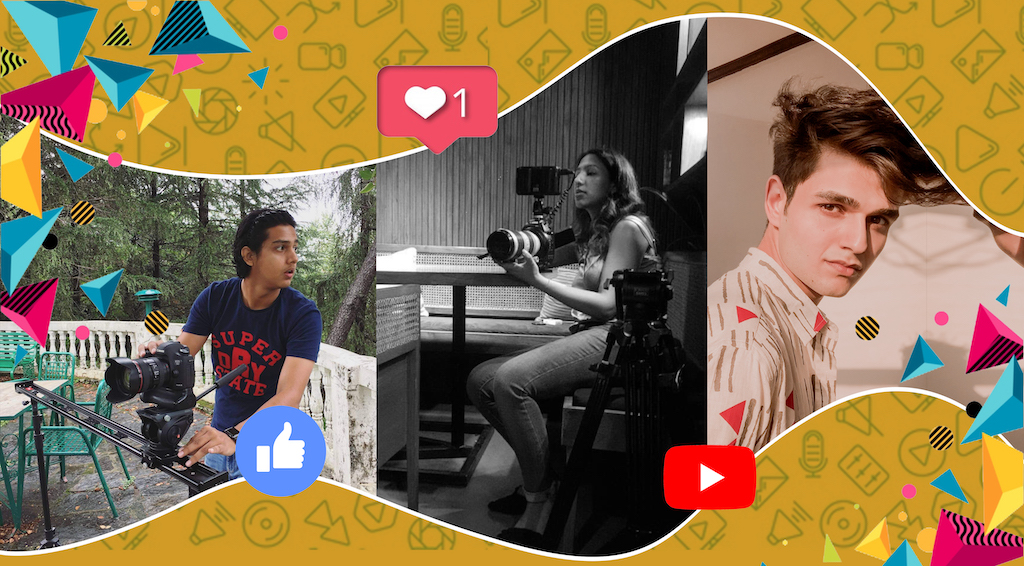 Behind the Scenes from Chandigarh!

‘You do not need a fancy camera to tell your story.’ This was modestly expressed by our guests, whose passion for saying ‘Action!’ drove us to listen to their tales!

This week, we look into the lives of Mukul Kapoor, Samar Singh Virdi and Ishma Mahajan, three young artists from Chandigarh, who take us behind the scenes of their journey and passion for film making.

Born in Chandigarh and currently aged 21, Mukul Kapoor is an independent documentary filmmaker, best known for ‘Ankuran: The Art of Idol Making’. He did his schooling at St. John’s High School, Sector 26, Chandigarh, and is currently pursuing his undergraduate degree in film making from Whistling Woods International, Mumbai.

During his childhood, Mukul had a heavy influence of ‘Art’ from his home. ‘I took up photography in my fourth grade, but I remained clueless as to how I can achieve a higher level of art. I’ve been to many theatre plays happening in Chandigarh, so I got inclined towards photography and film making.’

When asked about his most proud project, Mukul vividly recalled his memories of shooting ‘Ankuran’ back in 2019. ‘The closest encounter I could possibly have with Ganesh Chaturthi was either Bal Ganesha or My Friend Ganesha, so I was overwhelmed when I attended the festival for the first time. But I also witnessed how people did not value the art, here, the idols when they are submerged into the sea, so that’s how the idea of Ankuran came into being. This project, for now, has been one of the most intense and beautiful projects I’ve ever written and directed so far.’

When asked the young filmmaker as to how the deadly COVID-19 affected him, he says, ‘I felt uncertainty as to what is going to happen now. It has been a challenge to keep a balance between my education, mental health, future and films, but I reminded myself to calm down and remember that it’s not just me but everybody else out there.’

When asked about his future plans, Kapoor said to firstly, work on the projects he wrote, once it is safe to work again.

‘I shall be inspired every single day and go out there and make films.’

“To be a filmmaker you need to have a skin of an elephant but the heart of a poet. You need to be very devoted to the art itself. Don’t get demotivated by what you see and never lose yourself during the process because it’s you who is telling the story.”

‘I am Samar Singh Virdi and I am a ‘Storyteller’

Currently aged 22, Samar was born and brought up in Chandigarh, where he grew up with a passion to create. He did his schooling at Vivek High School, Sector 38, Chandigarh and is currently pursuing his undergraduate degree in Architecture from Chandigarh College of Architecture, PEC Campus, Chandigarh.

Samar took up photography at the age of 12 and then film making at 14, as a mode to express himself.

‘I would like to call filmmaking a form of expression told in a sequence of events.’

Samar is best known for being the youngest finalist on Nat Geo Cover Shot Season 4: Heritage City, held in Delhi and featuring in the Vivo x Nat Geo Traveller Ladakh special. He is also known for making ‘ialam: Punjab’s Battle for Sanity’ and ‘Ek Ravan’ which also gained critical acclaim.

‘My journey has been a learning one; since I am young and still have a lot to learn.’ says Virdi.

When asked about how he manages his life between his education and projects he says that architecture requires you to take at least a few pictures every day but it can take a while to make a film. ‘I realized that photography and film making is also a form of design and since I felt fascinated towards Architecture, I realized that this profession was way more than just technicalities.’

‘The Age of COVID-19 really restricted my movements. At first, I felt a lot of uncertainty but now after a year, it feels like maybe we used to be this way. I feel independent filmmakers had the most hit of the pandemic since it restricted their movements as well.’

‘I learnt how to be independent during this pandemic since a lot of responsibilities come over your shoulders. I also learnt how to help one another and keep each other happy.’

When asked about Singh’s future plans, he replies that he definitely sees himself as an architect for the years to come. ‘I always had a passion for this field, but I also feel that Architecture will not restrict my movements as a photographer and filmmaker, as they are the medium through which I express myself.’

Samar has been ranked under Top 10 photographers by The Huffington Post and Buzzfeed.

“To be passionate about something, you should be clear about what you want to do. If you are a filmmaker, think about how you are going to make a film and be clear that you just want to make films.”

An independent filmmaker since 2017, Ishma Mahajan pursued her schooling from Carmel Convent and St. Stephens Chandigarh. She later pursued English Literature from Lady Shri Ram College, Delhi and later returned to Chandigarh and started to pursue her passion for filmmaking.

Currently aged 25, Ishma is best known for being the Director of Legato Pictures, a U.S. based production house.

‘Film making is coming together with a lot of creative energies and then creating something which has a creative energy of its own.’

‘I started filmmaking in college while I was pursuing Literature. At the time, I lived in a very stimulating environment as I was reading some amazing works. I used to follow a friend, who was a photographer, on her projects and that’s how my passion has really begun.’

Creative work always demands good brainstorming and in the case of Ishma, maybe 1000 cups of coffee. ‘My writings are very character-driven, so I would observe someone who seems very interesting and then I would just imagine ‘how will they act in this scenario?’.’

‘When I started writing, I thought I might need to go to Bombay because that’s a general idea. But when you think about creating something, it doesn’t really matter where you are. The place around you has so much to offer and I allow it to just take me. It’s all a natural process.’

Like the rest of our guests, when we asked Ishma about facing a particular challenge during her shoots, she recalls by saying that she faces challenges all the time. ‘I remember shooting my last project which was at night. I had every step planned and we wanted to take a long shot and everyone, the cameramen, actors were all ready but as soon as I said ‘Action!’ the light went off.

‘When the pandemic struck, initially I couldn’t really think about film making but eventually, I accepted the fact that this is a big issue and maybe I’m fortunate to be at home and I can go back to things like reading and dancing. I started learning Kathak, which is also a form of storytelling.’

When asked about her future plans, Ishma firstly describes her will to go back to shooting again. ‘I also want to pursue a master’s degree, so that I can get a little professional training in films. I feel after all of this will be over, I will be back again on my tracks with new energy.’

‘I also hope that I see myself making feature films and working with international artists in different locations and I have a filmography that I can be proud of. I would also like to experience shooting documentaries in the near future.’

During her filmmaking journey, Ishma has directed eight short films. She has won two awards, one film festival selection and a nomination at Shorted Films for ‘The Wonders of Slum 105.

“If you really want to tell a story, you don’t really need fancy equipment and all those resources to be able to do that. You just need to be creative. There’s nothing stopping you. You should just have that conviction in your idea, and you could just do it.”

Ishma’s short films are available on YouTube and Vimeo under the Legato Pictures channel.