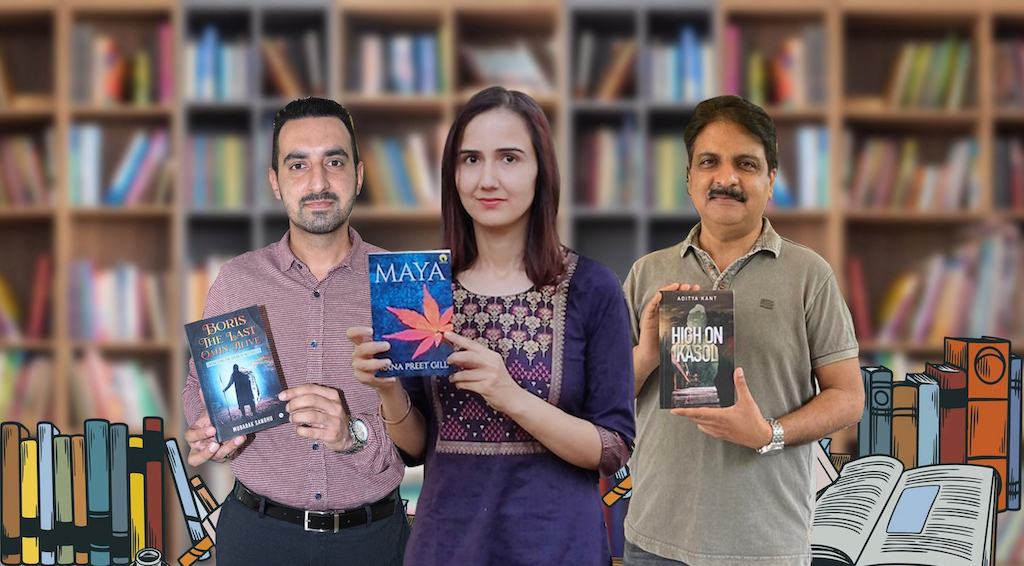 Nothing in this world can be as comforting as a good read! So, for all our readers, we present three hand-picked books from different genres which are written by some sought-after names from the circle of writers in Tricity. From a murder mystery to a thought-provoking tale of emotional upheaval during adolescence and an intriguing fiction tale, our cover story features it all. We hope you’ll enjoy reading it!

High on Kasol: A Murder Mystery

A work of fiction inspired by certain real characters, High on Kasol gives insights into the conflicts and dilemmas of youngsters and their families that are being affected due to the growing culture of substance abuse, particularly artificial drugs and invasion of their culture by the outsiders.

The debut novel of Journalist-turned-author Aditya Kant, ‘High on Kasol’, is a crime thriller that revolves around the issues of drug trafficking and addiction amongst the youth, in the backdrop of Parvati valley in Himachal Pradesh.

“There is much more to Kasol and the Parvati valley than what one generally reads or sees on social media and in the news. People and outsiders generally link the valley with the availability of world-class hash, the culture of rave parties, and the influx of foreigners in the area. Whereas the truth is that all this does not really give a true picture of the real-life in the valley. The valley had a life and its own culture much before the small town emerged on the world map as a sought-after place by the Israelis and other foreigners who were enticed with the picturesque and serene valley,” he shares.

Aditya Kant, who has been a journalist for about two and a half decades and is presently working with an English daily in Chandigarh adds that through his upcoming novel ‘High on Kasol’, he has delved into various aspects such as the conflicts which have arisen between the locals and the outsiders including the foreign nationals who have been settling in the valley and the challenges being faced by the youth and their families in dealing with the drug trafficking and substance abuse particularly artificial drugs.

The story gives insights into the lifestyle of people living in the valley, who are now striving to protect their traditions and culture from outsiders.

“The myths about the valley – known for producing top class hash – that every villager around there is a cannabis grower and speculative media reports about the foreign nationals, who have gone missing from the valley in the past couple of decades, for various reasons, have been creating a lot of curiosity amongst the people. I have broadly dealt with these and many similar issues, through a fictional story which is narrated in the backdrop of hills,” Kant reminisces.

“It’s my way of paying tribute to the natives of the mountains for whom I always had lasting respect and deep affection,” says Aditya Kant when asked what prompted him to write on this issue.

The book has a catchy title, “High on Kasol” which is a play on the traditional agriculture of psychedelic plants in the far-flung areas of small hamlets in the Himalayas, and the cruel aberrations in its trade.

The book is soon going to be available on various online and offline platforms including Amazon and Flipkart. Besides, it would also be available with its Kindle version.

It talks about Maya and Zenia who live with their mother at Galaxy apartments in the suburb of Dwarka. Maya, the younger, is insecure and full of negativity because of the scars which did not leave her face after a dreadful chicken pox bout in childhood. Zenia’s charm and the constant comparisons in their physical traits creates a rift between them, and Maya ends up doing something that she shouldn’t!

While providing an insider’s view into the book, Dr Gill shares, “This book is somewhat about sibling rivalry and is partly inspired by a real-life incident which captured my attention as an adolescent. It is full of interesting twists and turns which I would not reveal, for which you need to read the book!”

When asked about her experience of writing this book during the pandemic, Dr Gill modestly explains, “I had spent the most of my time during pandemic in reading and researching for a new book which is a non-fiction project. The times of pandemic have been very tough for all of us. For me, reading proved to be very therapeutic and writing came as a blessing. It helped me a lot to tide over the unprecedented times.”

“It is very important to stay positive and follow the precautionary measures during this testing time. Getting vaccinated along with wearing masks and maintaining social distancing is of paramount importance. Each of us owns the responsibility of our own health and mental well-being. I believe that the pandemic will eventually die down. We need to work on the safety measures consciously and should adhere to them.  This too, shall pass!” she concludes.

Dr Gill has been attending online sessions of authors and writers in the times of pandemic to keep herself motivated. Her go-to platform is Majha House, wherein she continues to participate in intriguing sessions with great authors. Her latest book, Maya is available for sale at bookstores and Amazon.

Boris – The Last Qahn Alive: A Must-Read for Fiction Lovers

Fiction novels have always surprised the readers with immense imaginative storylines of writers which are otherwise far beyond the scope of reality and general mindsets.

A recent entry in the category of fiction novels yet again proves that a writer’s imagination has no boundaries. The title of this book is ‘Boris – The Last Qahn Alive (Unearthing the Spear of Neutrality)’ which has been written by Mr. Mubarak Sandhu and published by Notion Press Pvt. Ltd.

This fiction-based book narrates the story of Boris, who lives with a group of nomads but belongs to the legendary race of Qahns whose leader, Yura, once sacrificed himself to save the kingdom and its people when attacked by the ferocious King of Seabed – Crato.

Boris, unknowingly, faces the same responsibility, which is to save the Kingdom of Ekaardus during Crato’s next invasion, by killing him with the Spear of Neutrality. What happens later, especially towards the end, is bound to make the readers ponder and wait for the sequel of this book.

The book emphasizes on having patience and motivates its readers to find strength in loneliness. A very strong message of victory of good over evil is conveyed through the book, irrespective of time and circumstances. The way a person can leave a mark on others with his truthfulness and insist them to help him even without asking is very well put by the author. The brief poetic conversations of characters work as icing on the cake, making the story more engrossing and tasteful.

From an engineer, to an entrepreneur, to an author – Mubarak Sandhu, a Mohali resident, is a self-made youngster with a very positive approach towards life, which is crystal clear from his blog, www.mubaraksandhu.com. He studied in BDPS Patiala, then graduated as Mechanical Engineer from BBSBEC, Fatehgarh Sahib and eventually settled in Mohali with his family. According to him, the never-ending support of his family and friends encourages him to focus on his goals and work harder each day in order to achieve those targets. He modestly shared that he always finds satisfaction in his efforts, instead of the results of those efforts; thus yielding happiness even in failures!

The book was released by Vivek Atray, former IAS, author and motivational speaker. It will soon be available in more than 150 countries as both an eBook and paperback edition.