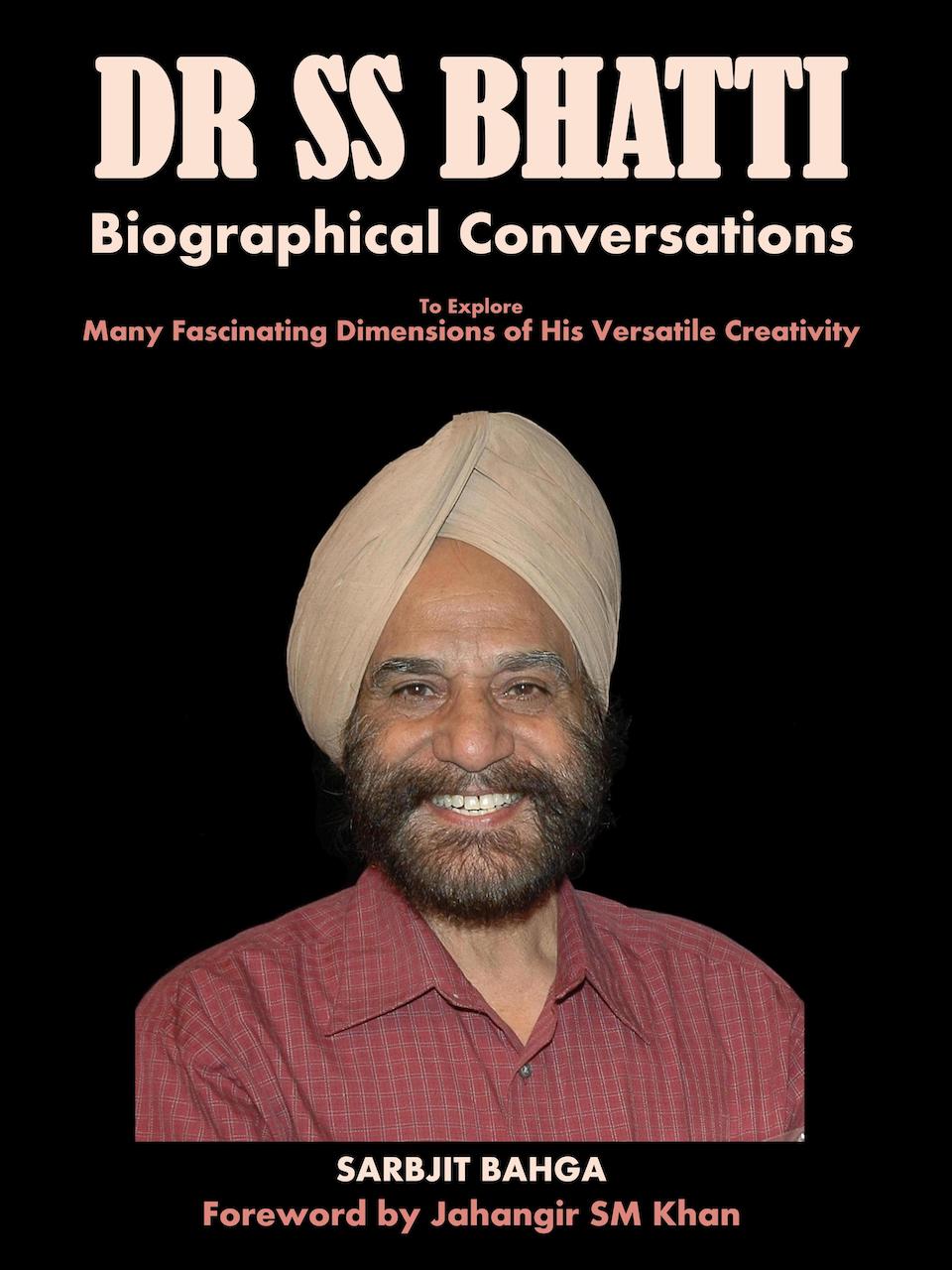 A new book titled, “Dr SS Bhatti: Biographical Conversations” has been launched recently. It has been authored by Sarbjit Bahga, a Chandigarh-based architect, and published by White Falcon Publishing, Chandigarh. Foreword to the book has been written by Islamabad-based architect Jahangir SM Khan, Immediate Past President of ARCASIA (Architects Regional Council Asia).

Dr SS Bhatti: Biographical Conversations is a unique biographical book written in the form of an extended interview. Dr SS Bhatti (b.1938) is a former Principal of the Chandigarh College of Architecture and a very versatile professional. He holds three PhDs and M Arch from The Queensland University, Australia. Apart from being an inspired academician and architect, Dr Bhatti is a painter, sculptor, graphic designer, Urdu and English poet par excellence. He has authored more than 30 books on diverse fields like art, architecture, pedagogy, religion, poetry in both Urdu and English, besides other fields of human endeavour.

As a student of Dr SS Bhatti from 1974 to 1979, the author had found something unusual in his teacher’s demeanour and teaching style that prompted him to sustain it at any cost. Fortunately, he has succeeded in doing so for nearly five decades. During this half a century, the author has kept track of Dr Bhatti’s diverse activities and achievements.

What he marvels at is Dr Bhatti’s undiminished vitality and vigour with which he still maintains the momentum of his versatile creativity in terms of astounding quantity, quality, and diversity. Surprisingly, far from slowing down, his output has shot up in every way in every sense of the word.

Dr Bhatti’s versatility spans the entire gamut of human creativity from sombre seriousness to rib-tickling humour that makes him an apt example of his credo of ‘Holistic Humanism’ [his coinage]. His depth of scholarship, breadth of knowledge, and height of imagination is hard to match, which together make his life a rich source of enduring inspiration for anyone who has the passion and perseverance to tread such an offbeat path. The present book has attempted a laser-like peep into his mind to observe and understand its mystical mechanics, to record the best of everything in scope and diversity for posterity.

To explore many fascinating dimensions of Dr SS Bhatti’s versatile creativity, the author has carefully formulated more than two dozen questions that form the basis of this book. Dr Bhatti was then persuaded to answer these questions elaborately. The questions range from his schooling days in Amritsar to his five-year-long study at Sir JJ College of Architecture, Mumbai, and further on to Chandigarh College of Architecture as a founding teacher and then as its Principal. Additionally, to his teaching methodologies, contribution to architectural education, architecture, painting, sculpture, murals, and journalism, besides English and Urdu poetry, have been studiously documented for future generations of students, teachers, theorists, researchers, and practitioners.

About the author’s thought-provoking approach to the contents and form of the book, the learned Ar Jahangir Khan has written in his Foreword, “The biographer has drafted the questions well and arranged them with matching thoughtfulness in chronological order, which has elicited very candid answers from the biographee making his biography an engrossing and inspiring treatise that will have, in my considered opinion, an enduring educative value for students and teachers of architecture alike. While answering the author’s straightforward and at times tough questions, Dr Bhatti has minced no words to respond as explicitly and as evocatively. Additionally, he has touched many other important aspects of art, architecture, and education that reveal his vast knowledge and profound understanding of incredibly diverse disciplines without diverting focus from off the stated subjects.”

Khan further adds, “Dr SS Bhatti’s answers to the author’s more than two dozen questions seem to me as if he is rewriting the History of Architectural Education in India, suggesting thereby an outreach beyond national borders. His narratives about his days at Sir JJ College of Architecture, Mumbai, in the mid-1950s, have attracted especially my attention. I found his description of favourite teachers at JJ very interesting. These include SS Reuben, De Lima, VS Gore, ZN Gobhai, Dagdoo Bhonsale, Jahangir C Shroff, MM Vijayakar, KB Gatne, SH Parelkar, Homi Dallas, Rusy Khambatta, Yahya C Merchant, besides Gondhalekar and Sathe, to name only a few. Their skills and teaching methods are indeed an inspiration for the present and future generations of teachers of architecture in various institutions.”

The text in the book is supported by select images (65 b/w and 79 illustrations in full colour) of Dr Bhatti’s personal life, architectural works, sculptures, murals, paintings, perspective drawings, and freehand sketches. A glance at these images makes it easy to understand his versatility, knowledge, imagination, and command over so many diverse fields. 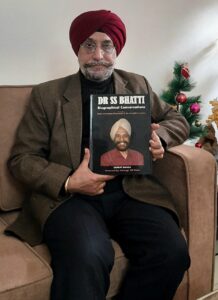 The author has made a successful attempt in this book to access the hidden resources of Dr Bhatti’s mind to extract priceless knowledge and to record it for the benefit of future generations. The book gives a tacit invitation to them to tread the path of art, architecture, painting, sculpture, poetry, journalism, and, above all, architectural education in the new direction of what the biographee has named “Holistic Humanism”.

Another interesting feature of the book is “What Others Say About Dr SS Bhatti”. This section includes brief essays by 18 of the biographee’s former colleagues, friends, and students. Many interesting anecdotes which form part of these write-ups portray his affectionate relations with all age-groups revealing playfully the humorous aspect of Dr Bhatti’s persona. True to the spirit of “Creativity knows no bounds”, Dr Bhatti’s humorous anecdotes mentioned by some authors of these essays show the entertaining lighter side of his genius.

Dr SS Bhatti is a founder-teacher and former Principal, Chandigarh College of Architecture, Chandigarh, established in 1961. He is India’s most versatile professional pursuing 55 subjects/disciplines. He has been aptly nicknamed “Chandigarh’s Mr Versatility” by Chandigarh Newsline of The Indian Express.

In the 1970s, he pioneered Architectural Journalism with the publication of his article: ARCHITECTURE – a Case against Pseudo-Modernism in The Sunday Tribune. He became the founder-Editor of INTERIOR DESIGN, the Journal of the Indian Institute of Interior Designers [IIID] which he had co-founded with Sardar Manjit Singh Majithia. He did studies of the architecture, design philosophy, and methodology of India’s three top-ranking architects: JA Stein, AP Kanvinde, and Shivnath Prasad in 1973 when architectural research was hardly seen anywhere in Indian Schools of Architecture.

Dr Bhatti has published over 700 articles on wide-ranging subjects, themes, and issues in regional, national, and international newspapers, journals, and magazines. He invented Holistic Humanism with his epoch-making article The Scourge of Specialisation published in The Times of India in 1978!

Graduating from Sir JJ College of Architecture in 1960, he has since earned three PhDs on: (i) Chandigarh [This doctorate is a most comprehensive original research document produced in 1991 on the planning, architecture, landscape, urban design, etc. of the new capital of Punjab State that had lost Lahore to Pakistan in the political partition of 1947], (ii) Creative Mysticism [Study of Guru Nanak Bani vis-à-vis World Religions using the tools of Architecture done in 2000], and (iii) Golden Temple [Study was done in 2008 of the Sikh Faith’s holiest of the holy shrine at Amritsar which is the most preferred destination of international tourists]. He earned from The University of Queensland, Australia in 1983 the degree of M. Arch. on Nek Chand’s Rock Garden [Pioneering research that established this “Outsider Art” as modern India’s most famous artwork worldwide].

Dr Bhatti has to his credit 33 books [including six poetry anthologies] on diverse subjects, seven of which were published in America. He has written 1,000 poems in English and 5,000 in Urdu, Hindi, and Punjabi. He uses T’ameer Chandigarhi as his Takhallus [penname] for Urdu poetry. When he took fancy to verse in this magnificent language, he was the first architect on the Indian subcontinent to write poetry in Urdu. In this context, his pseudonym T’ameer [Arabic word for Building Design] is an offbeat sobriquet that becomes truly unique with the suffix Chandigarhi [which means someone who is based in Chandigarh].

He has won over 20 national and international awards, including IIA [Indian Institute of Architects] Professor MB Achwal Gold for Lifetime Achievement in Architectural Education. Chandigarh Sahitya Akademi conferred on him the Best Book of the Year Award-2019 in the category of Urdu Poetry and Award of Recognition-2020 for Outstanding Contribution to English Literature/Language. Both awards carry a citation besides a cash prize of Rs 25,000.00 in the first case, and Rs 1,00,000.000 in the latter case.

Ar Jahangir Khan has summed up his Foreword as, “From my experience as President of ARCASIA combined with my extensive interaction with numerous architectural institutions in Asia, I can say that books such as this one are a rare boon for the enrichment of Architectural Education in the world. I, therefore, recommend all institutions to acquire this treatise for their libraries. It will not only enrich their academic repertoire but also motivate them to publish their memoirs for posterity.”